To Jail or not to Jail. That is the Question.

Yesterday the Scottish Justice Minister was commenting on the current high numbers of prisoners in our jails. You can read more here. Last year eighty percent of those sentenced received sentences of less than six months, the inference obviously being that their offences were minor. The Justice Minister and his party colleagues want to see the number of those sentenced to prison for less serious offences reduced. I am sure this is for ideological reasons but of course a useful spin-off would be that it would greatly ease the pressure on our overcrowded jails.

One problem for those who are sentenced to very short prison terms is that they are not usually able to benefit much from the resources within the prison service particularly in terms of education, vocational training, anger management and cognitive skills courses and so on. Thus, many feel, there is little benefit in sending them to jail and the reoffending rates are pretty high. On the other hand, at least while they are in jail, the public are getting a rest from them.

From reading many a police blog I appreciate that already for some time a lot of policemen/women have by and large been frustrated that so FEW of those convicted by a court get a custodial sentence, and, worse, for them, that so MANY "get off on a technicality". It clearly takes considerable effort for the police to get a case from the moment of apprehending the suspect to being ready for the prosecutors, so I can imagine that it is disappointing for them to have it come unstuck before a conviction can be secured. I expect then, that this announcement won't be music to their ears.

As I'm a humble nobody in the grand scheme of things, and don't move in the echelons of the Scottish Parliament, I really don't know all the factors they have to take into consideration and I'm not intending this post to be offering them advice! 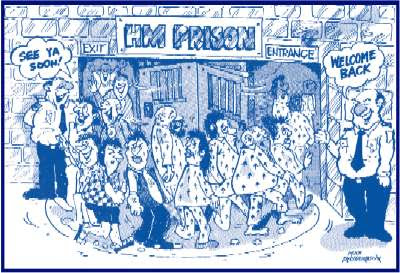 On the other hand, because I'm on the ground, I think in terms of individuals and their stories. Also, I used to work in a night shelter/day centre for single homeless men ("down-and-outs") and for some of them their life involved umpteen short sentences. They accepted this as part of life and indeed knew that it was in the course of their month in jail without alcohol that their health would improve sufficiently to keep them alive during the next spell on the streets with the Superlager. It would be hard to manage these unhealthy individuals on a community penalty where realistically their ability to work at anything would be very limited.

That's just one type of prisoner. There are lots and lots of types, with different needs. I certainly don't want to see the numbers in prison go up just for the sake of it. (If it was up to me none of us would commit crime at all and we wouldn't need prisons, but it's not up to me). But, given that prison can literally be a God-send for many guys (I've lost count now of the number of prisoners, usually from a background of drug addiction, who've said to me, "I'd be dead by now if I hadn't got the jail"), I wouldn't like to see offenders refused the opportunity, and opportunity is exactly what it can be, to go to jail to access help and to break the cycle of bad-influence associates, addiction, gangs, whatever.

And yet, it has to be said, and Nightjack says it well, that for other groups of prisoners, prison is just too familiar and easy an environment and is no deterrent at all.

You always raise issues that I've never considered, and if nothing else, it makes me realize that the opinions most people have about jails and prisons are far too simplistic. So it's a good work you do posting these things, even if all you do is conclude that it's complicated.

I agree with Ruth Hull Chatlien. My view of prisons/police/criminals is very much from the outside, as a victim of crime. It is very frustrating when you see the perpetrators thumbing their noses at you having escaped a custodial sentence, on the other hand, if all that prison is doing is giving everyone a nice rest, what's the point? I don't want to see offenders sent inside to learn new 'skills' and little else. I don't want to be a victim of crime again. It is, indeed, complicated.

Of course, if chaplains were to operate a completely incarnational ministry model, we'd have to lock you all up as well.....

It is complicated. You are so right. It's a shame that Mr. Ordinary still feels he can express his flog 'em and hang 'em views.

Jay, I've been a victim of crime too, on several occasions including quite recently so I can relate... Restorative Justice is a rising phenomenon involving victim-perpetrator meetings. Closure for the victims, an opportunity to realise fully the effects of their crime for the offenders. It's interesting stuff.

THM, being locked up wouldn't fully do it as we wouldn't have the whole experience of arrest and court and so on, so I better get busy planning a crime...