If you've only time to read one post, please read yesterday's one instead! 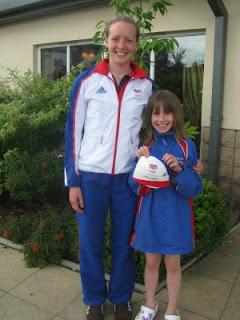 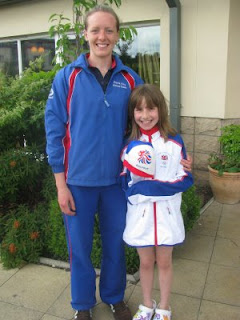 We were privileged at church this morning to have Olympic swimmer Kirsty Balfour with us to present the prizes at the Sunday School prizegiving and to talk a little about her faith which has sustained her through the highs and lows of her swimming career. Our own Penultimate Child is a keen swimmer and was beside herself with excitement at this.

In the absence of a kitchen (we now have a working sink though, and the washing machine is plumbed in - woohoo!) we went out for lunch afterwards with Kirsty and her husband David.

Afterwards, Penultimate Child was given a present of a swimming cap with the Bejing Olympics logo and "Kirsty Balfour" on it, which will be a treasured possession. Then they had their photo taken together, then swapped tracksuit tops - just for the photo of course.

It's great for our daughter to have hsd this experience today of a really positive role model from the sport she loves and it's great that Kirsty and her husband are involved in the youth work in their own church so that they can be role models for their young folk.

Kids look up to role models; they can't help it. We are designed to seek role models as we grow up. Unfortunately our current celebrity culture doesn't always offer the best of role models for young folk but it's great that there are positive examples in our communities if we look for them.

What makes me sad in Prisonworld is that so many guys I work with haven't really ever had good role models in their lives and what makes me even sadder is when I see "STP"s (short term prisoners) look up to "lifers" (life sentence prisoners) and treat them with a sort of reverence, as if they were something to aspire to.

I'd like to see more mentoring for prisoners, people who would model a pro-social lifestyle but in an informal friendly way. Prison officers and social workers can't do it. The prisoners almost don't see them as human beings! But volunteers getting alongside them through playing football, doing artwork, participating in Bible studies, and just "chilling" would seem to me to be a good way to go. Unfortunately that's not as easy as it sounds to achieve, with all the security implications that go along with it. And the media seem to prefer to encourage society to adopt the "lock 'em up and throw away the key" approach.

But for those who haven't so much gone off the rails as who've never even seen the rails, it seems to me that positive role-modelling would be well worth a bit more experimenting with.
Posted by AnneDroid at 15:50 2 comments: 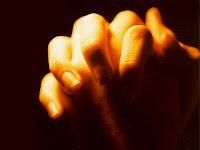 Mr Nighttime drew my attention to this article. I find it very very sad as Nightjack was one of my favourite bloggers. I didn't always agree with what he said, but I thought that he remained the right side of the line and was a super writer. I also felt that it was good that the police has people in it who care so passionately that the powers-that-be should act with integrity and wisdom.

Recently I've been frustrated by some of what is allowed legally to masquerade as journalism in our tabloids. There is so little redress if there are inaccuracies in a newspaper story. If you do manage to get a retraction, it's a tiny one-liner buried near the back of the paper. I know that compared to some totalitarian states we have "free" press and I'm grateful - very grateful in fact. However free doesn't mean fair and well-balanced.

Blogging gives people - ordinary people who aren't either journalists or politicians - a voice and Nightjack generally used his extremely well, I thought. People who work in the public service and who are passionate about their jobs and want to see the system be as good as possible aren't dangerous anarchists. They're ambassadors for their profession. We who read blogs have brains and can reject what we read. On the other hand we who read blogs may also have our horizons broadened and our understanding deepened. One of the things I love about reading blogs is that I get an insight into new spheres, and I'd be really sad if public servants felt that blogging was just too risky.

Incidentally you can hear his writing being discussed on this BBC program back in May when he won the Orwell prize for his writing.
Posted by AnneDroid at 20:15 3 comments: 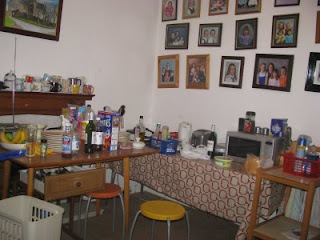 Our current kitchen and our temporary kitchen.

I'm more worried about missing my washing machine than the cooker! Do you think I could use the prison laundry? In a couple of weeks it'll be worth all the upheaval though. The old kitchen was literally falling apart. The other week the drawer unit fell apart, all by itself. 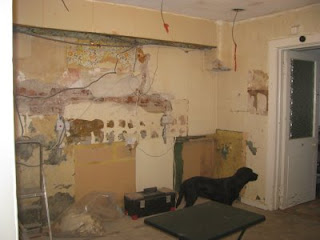 Various friends featured this on Facebook. It's just nice to hear positive, happy, fun, accurate comments about church from media rather than some of the frankly ignorant crap I've read recently in some newspapers from folk who'd obviously not been to church themselves for a hundred years. Chris Moyles hadn't actually been to this Peterborough church but had seen it on tv and was clearly impressed.

The commonest reaction to our church from people who come along to a special occasion and who hadn't been to church since childhood is much more along the lines of Chris Moyles' reaction than anything negative. When I take prisoners out to church, as I do sometimes, they are generally blown away.

Certainly some self-indulgent and luddite churches have turned themselves into stale museums where eveyone's pretending it's still the nineteenth century but there are others like ours who're GOOD places to visit. Happy, relaxed, cringe-free, positive, warm, non-judging and friendly.
Posted by AnneDroid at 23:48 4 comments:

Do you have a WEE car? 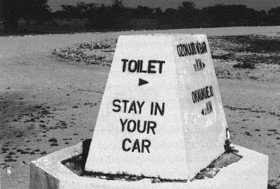 If you switch on our computer after the kids have been on, chances are the background (desktop wallpaper) will have changed. This one made me laugh. Thanks kids.
Posted by AnneDroid at 11:05 3 comments:

Here is a brilliant thing; good news amongst all the bad news which depresses us daily. Please, those of you who're the praying kind, get your praying muscles behind Exodus. I know some of those involved and it's fab, and so necessary.
Posted by AnneDroid at 23:59 1 comment: