Him Indoors is the only churchgoer in the family really. His cousin calls him the white sheep of the family. His family are lovely and I'm glad I'm part of it. He was youngest of four boys. When he told his mum (in the year 2000) that we were expecting our fourth child she said that that was ridiculous and that there was no need for that - he was delighted to remind her that she had had four herself... She also famously said at a big family gathering, when our overtired kids were bickering, "Of course, I never allowed mine to fight" (not that I was exactly allowing it!) and to a man each of the four guys showed her their various scarred knees, faces, elbows etc - the result of their brand of brotherly love.

The eldest "boy" lives in New Zealand with his wife. The next eldest and his wife have just celebrated their silver wedding. Our sister in law was only eighteen when she married and is only a year older than I am. The second youngest of the brothers will have been married twenty years this summer and Him Indoors and I will have been married fifteen. It's only a few months ago that we were gathered (the New Zealand pair too) to celebrate the guys' parents' golden wedding. My mother-in-law was able to come out from the hospice to the party on Saturday for which we were all really grateful. The silver wedding couple are on the left in this photo. 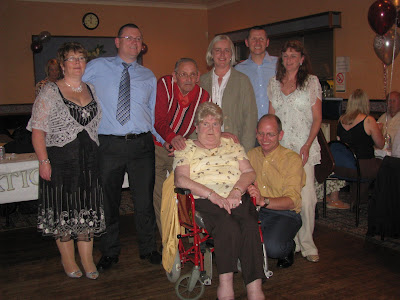 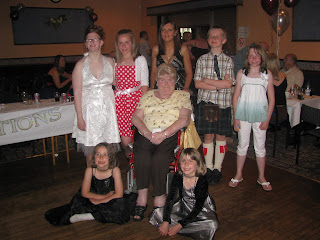 And here's my mother-in-law with her seven grandchildren. It must have been slightly strange after four boys to have six out of seven of her grandchildren be girls. She was a strict mum, apparently, but I find that hard to believe as she has spoiled all her grandchildren to bits! Her brothers and sister were at the party too.
Posted by AnneDroid at 22:54

Ah, it seems your mother-in-law has a good case of parental amnesia. How nice that you had that get-together for them though. Those family photos are great. It's fun to see the resemblance in the brothers.

It's a parental privileged to have a selective memory.
The party must have been a very special for your family
xx