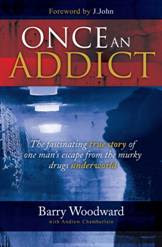 Tomorrow evening Barry Woodward is coming in to one of the jails I work in, to tell his story to some prisoners. If you click on that link the changing image at the top of the page will eventually offer you the chance to watch a video of him being interviewed for Premier Christian tv, and you can hear his story yourself.

His autobiography (also available to buy here, and, no, I'm not on commission) is called "Once an Addict" and it tells how he went from living in the so-called Bull Rings, flats in the Moss Side area of Manchester to a serious heroin addiction to crime and imprisonment to being now both drug free and a Christian speaker. Quite a few of the guys have said they'll come along, but I'm sufficiently long in the tooth in the prison service not to believe every promise a prisoner makes me!

I'm sure some will be there to hear, though, and I'm really looking forward to it because (just as happens in the type of support offered within, for example, Alcoholics Anonymous) someone in Barry's position can speak with an authority that I can't ever muster because he's been where many of them have been, or indeed still are. I'm on the ground to love and nurture the prisoners to the best of my very very limited ability but it's great to have this opportunity for the guys to listen to this powerful story from someone who's been there, and who knows to be true what they struggle to believe - that God loves "people like that". I hope tomorrow will see lives changed for good (in both senses of the phrase "for good").
Posted by AnneDroid at 22:08

I hope you get a good turnout.

Thanks, you two. It was a great night. I'm just delighted at how it went.