Good News for a Change.

Some time ago I pointed you in the direction of the blog of a fellow prison chaplain in Scotland whose new initiative I'm a big fan of. It was really very encouraging to read this update on his blog, especially since I know one or two of the men he's talking about.

Prisoners can be at services every week during their sentence but as I've often spoken about here, it's very difficult for many - most, even - of them to make the transition to church on the outside. The first wee while out of jail is very difficult generally for lots of other reasons too. It is so wonderful to know that these guys are managing, with a bit of facilitation, to support and encourage each other.

I've been invited to go along myself sometime, which I'm looking forward to. Meanwhile, if anyone has a spare house, or a spare minibus, or some spare money, do let me know!! Or if not, your prayers would also be much appreciated.
Posted by AnneDroid at 22:44 2 comments: 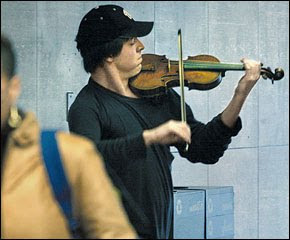 Washington, DC Metro Station on a cold January morning in 2007. The man with a violin played six Bach pieces for about 45 minutes. During that time approx. 2 thousand people went through the station, most of them on their way to work. After 3 minutes a middle aged man noticed there was a musician playing. He slowed his pace and stopped for a few seconds and then hurried to meet his schedule.

4 minutes later: the violinist received his first dollar: a woman threw the money in the hat and, without stopping, continued to walk.

6 minutes: A young man leaned against the wall to listen to him, then looked at his watch and started to walk again.

10 minutes: A 3-year old boy stopped but his mother tugged him along hurriedly. The kid stopped to look at the violinist again, but the mother pushed hard and the child continued to walk, turning his head all the time. This action was repeated by several other children. Every parent, without exception, forced their children to move on quickly.

45 minutes: The musician played continuously. Only 6 people stopped and listened for a short while. About 20 gave money but continued to walk at their normal pace. The man collected a total of $32.

1 hour: He finished playing and silence took over. No one noticed. No one applauded, nor was there any recognition.

No one knew this, but the violinist was Joshua Bell, one of the greatest musicians in the world. He played one of the most intricate pieces ever written, with a violin worth $3.5 million dollars. Two days before Joshua Bell sold out a theater in Boston where the seats averaged $100.

This is a true story. Joshua Bell playing incognito in the metro station was organized by the Washington Post as part of a social experiment about perception, taste and people's priorities. The questions raised: in a common place environment at an inappropriate hour, do we perceive beauty? Do we stop to appreciate it? Do we recognize talent in an unexpected context?

Thanks to Sonja for sending me this story. It's a hugely powerful one and illustrates a big problem I see in Prisonworld. Many prisoners have a skill or a talent of some sort which would be of benefit to society. Unfortunately, when they are released from prison, these talents will probably be overlooked and ignored because of the giant label they carry which says "ex-offender", together with the other giant label many of them have which says "underclass".

One question is just how to get society to see past these labels and see the gifted person within, and I don't know the answer. Another question is how to get the guys themselves to see past their own perceptions of themselves. So often, to the frustration of their families, and of us who work with them, just when they have achieved a success of some kind, they shoot themselves in the foot with, for example, a drug failure. It's as if they don't really think this new identity fits properly, and it's easier to go back to the familiar, in spite of the fact they know very well where the familiar has got them.

As a Christian working in a jail, it's fab to be able to tell guys who come to the services that God is already impressed with them. He doesn't care about their background or lack of education. He doesn't care that they have a criminal record. He doesn't walk past them, like the folk on the underground walked past the violinist, dismissing him as of no significance. He loves them and thinks they were worth His own Son Jesus. I tell them that when they get "libbed" (liberated, released) they should find a church to go to. I tell them that in the church, also, they will be loved for who they are. I hope that's true.
Posted by AnneDroid at 23:20 6 comments: