Top of the Criminal Tree. 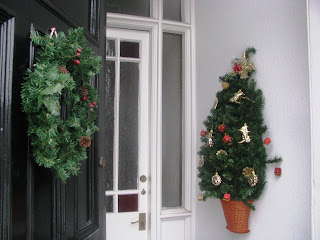 ﻿﻿We have seven and a half Christmas trees in our home this year, which I admit is kind of ridiculous.  Three of them are little artificial ones in the 3 bedrooms occupied by our 4 kids.  The Big One is in our sitting room and one is in our wee "family room".  The latter is very exciting for me because it's the first real tree I've ever had!  Some of the proceeds from it went to the homeless,which was a bonus.  We have two tiny wee trees as mantlepiece decorations too.  That's seven so far.  The half tree is the one in the picture.  We got it a number of years ago and it is literally half a tree which is designed to be wall mounted.  As you see, we have it between our front door and the storm door.
I love Christmas trees.... and trees generally, actually.
There's a phrase that has cropped up from time to time in discussion with prisoners as a prison chaplain and that phrase is "top of the criminal tree".  Prisoners are, like the rest of us, a diverse bunch of people.  Some of them, though by no means all, are "career criminals" - their very identity is as a criminal.  Their ambition has been to be top of the criminal tree.  If it's violence-related, then part of this has been that they have striven to be seen as tougher, harder, scarier, more vicious and brutal than anyone else.  (Sadly, this seems often to have had its origins in "care" where the only way to survive and thrive as a vulnerable child/young teenager was to be tougher than anyone else there.)
Top of the tree.... as I write this I'm glancing at the top of (my first real - did I mention that?  Yippee!) Christmas tree.  The top of our real tree is a long single "stem" whereas the artificial trees all taper more evenly, in a triangle shape.  The top of a Christmas tree, especially a real one, is a lonely spot, when you think about it.
This hasn't afflicted me on previous Christmases but many times this December when I've looked at Christmas trees I've thought a lot about the phrase "top of the criminal tree" and remembered so many conversations I've had with prisoners - including some who're very notorious and whose crimes where heinous - who speak to me about how their ambition was to be top of the criminal tree.  Yet when they got there they looked round and saw that, after all, it wasn't so fab.  It was in fact a lonely place to be.
Some of these individuals genuinely regret the path they chose.  Some of them want to reinvent themselves as "pro-social", as social workers would say, good guys.  This isn't easy for various reasons, and not just their own temptations and proclivities. Once you've got the reputation for being a hard man it's not easy to persuade people that, actually, you don't want to be that person any more.  You're quite likely to find yourself left alone up there, in a place you no longer want.
Please, this Christmas, if you're the praying kind, would you pray for the toughest, hardest criminals who've got to the to top of the criminal tree in their locale and realised it's not been what they expected - people who want to mend their ways.  Thank you, friends.
And Merry Christmas, y'all!  Thanks for dropping by my blog x
Posted by AnneDroid at 00:09 1 comment:

The Digital Story of The Nativity - fab!!