Happy Father's Day to my wonderful dad. I don't remember our first meeting, but I know he does. That's the unfair thing. He remembers all my childhood foolishness but I don't remember his. Fortunately he has an older brother who is a useful source of information! Anyway, I know I was a moody blighter as a teenager (hard to believe, I know, given my current delightfulness) and he put up with it all. For this and many many other reasons, three loud cheers for my dad! (And for my mum, as I didn't think of doing this on Mother's Day!) I see daily the fruit of dreadful childhoods in the lives of some (though not all) prisoners and it makes me appreciate so much more my own, whom I love.
Having one nice dad is pretty good, but I've also been blessed with a nice father-in-law too, who, from the very beginning has treated myself, and his other three daughters-in-law, like his own daughters. Wull the Bull (bull pronounced to rhyme with Wull), as Him Indoors disrespectfully calls him, fails constantly to hide a big soft interior with a tough exterior. And when he thinks, he puts his head to one side, which is very endearing. He is bravely coping with his wife's terminal illness just now, and if you're the praying kind, spare one for them please. "Happy" Father's Day might not be do-able for him, so I won't be so trite. 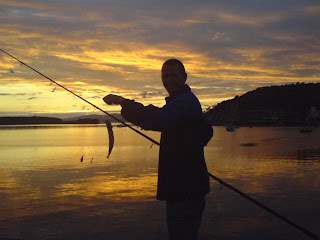 Our kids are being blessed too with a good dad, so I'm a grateful woman today. I'll count my blessings and name them one by one because I know it would be wrong to take all this for granted. Him Indoors caught this fish last year off Oban pier. I know it's not Catch of the Century but he was pleased, the soul. In our "courting" days, I never once saw him catch anything, except for a tree above his head. I laughed so loud and so long it was nearly curtains for the relationship, I think.
This father's day, I'm also thinking about a special guy, and his equally special wife, who're good friends of ours, and who're now only a few days away from meeting the wee one they are about to adopt. Happy Father's day to you. Ruth was talking on her blog about what makes her cry. Adoption moves me to tears. We have other good friends who've adopted twice and I found it so emotional to watch. I know it's partly because of what I believe about the Christian faith. John 1:12 says, "Yet to all who received him, to those who believed in his name, he (Jesus) gave the right to become children of God - children born not of natural descent, nor of human decision or a husband's will, but born of God". (John 1:12).
The logical follow on from that is to think of my OTHER father, my heavenly Father, God, to whom I have the strongest urge, twee and corny though it may seem to some of you, to include Him in my Father's Day wishes, and to thank Him again for His eternal patience with my many shortcomings.
Posted by AnneDroid at 22:34

Anne, what a nice post. I love the photos of the fathers. Such great faces. And how good of you to remember your friends who are adopting.

My dad's pic will be up tomorrow, but I chose to go with a younger look. :)

P.S. You are delightful, you know.

That was a great post... I miss my dad still after nearly 6 years and that made me remember him and all his patience..

Which one is your father? Is he the on with Glasses on? By any chance's is his name Ron??