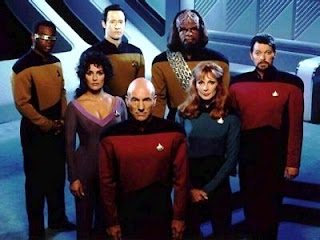 As I have mentioned before I used to watch Star Trek, in a mildly enthusiastic way. I was never a Trekkie or anything but, being an annedroid, was very partial to Lieutenant Commander Data. It is not he who I am here to talk about, however. Just as the Daleks are the most notorious of Dr Who's enemies, so also Star Trek's crew had some notorious enemies, among the most famous being The Borg. 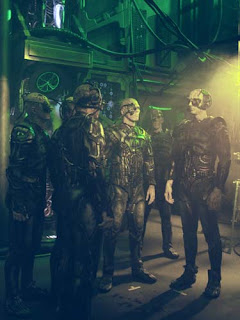 Wikipedia says this about The Borg: "The Borg are depicted as an amalgam of cybernetically enhanced humanoid drones of multiple species, organized as an inter-connected collective with a hive mind". (Note to reader - it's just a story, so don't be lying awake worrying about them, now!) I don't know much about it but I think the "hive mind" is not a new idea in science fiction and it's been copied since. It's an interesting one though.

Wikipedia goes on to describe the Borg as "inhabiting a vast region of space with many planets and ships. They operate towards one single-minded purpose: to add the biological and technological distinctiveness of other species to their own, in pursuit of perfection. This is achieved through forced assimilation, a process which transforms individuals and technology into Borg, enhancing individuals by adding synthetic components". In one episode, Captain Jean Luc Picard himself is assimilated and as usual (!) everything seems doomed for a while, but (SPOILER ALERT) it all gets sorted out. Hurray! 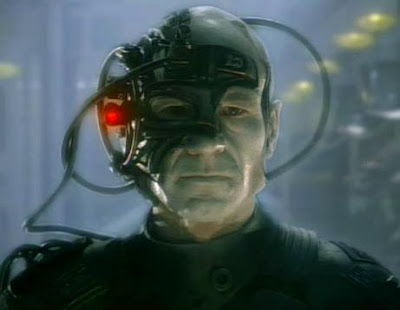 From time to time I've thought of the Church (in the big worldwide and ongoing sense) as being a bit like the Borg but in a good way. In the Borg there is an intense connection between the Borg as they not only think alike, as you and I might sometimes do (or not!), but their thoughts are the same emanating from a shared Consciousness.

They are in pursuit of perfection (according to their twisted view of perfection) and are constantly on the lookout for new recruits, with their cheery wee catchphrase, "You will be assimilated. Resistance is futile". The assimilated are "enhanced" and made to look like the rest of the Borg.

In the Church, we believe that God is at work in us making us more like Jesus. This is a slow, slow process, and for some of us (me) extremely slow... We are, in a good way, being assimilated! But resistance is not futile. Well it is, but not in the way the Borg meant it. We can certainly resist. God will leave us be, if that's what we want. No one is forced to be a Christian, and once they are, they're not forced to grow in their faith against their will. Resistance is, on the other hand, futile in the sense that it's futile for us to think we will make a better job of running our lives than God would.

But if it's true that significant numbers of believers around the world are allowing God to work in them, inevitably it is also true that, in some ways at least, their thinking will be growing more alike, as they gradually learn to allow more of their thinking to emanate from that Consciousness who is God.

And yet there are such big differences. The Borg are baddies who are ruthless in using other people as commodities. Although the Church gets some abuse from the world, plenty of it richly deserved at times, it is also undeniable, even to our fiercest critics, that a lot of Church people do very altruistic stuff. Many a town councillor would admit that were the churches suddenly to cease all their work in the social sphere with wee ones, youth, elderly, etc, a huge and expensive hole would open up, which couldn't easily be met. That's just a fact. The Church aren't baddies, though there are certainly baddies sprinkled about masquerading as the real thing when they're not (a lot of them seem to wind up on religious tv, to my intense frustration). The Borg forcibly assimilate. The Church longs to have new people join, too, but (a) they aren't forced and (b) the reason is not to fill the seats in the buildings but because those who are in already are just beggars telling other beggars where they found food (sorry, I'm onto a new metaphor there).

I love the idea of the Church as a good version of the Borg. I think of it often and celebrate my Borg-ness. Working towards a sort of Hive mind, in a good way, and yet with a God who deliberately made us all incredibly different from one another, unique even, and who would never for a minute want to make us clones of one another. One body, many parts, is the much neater, more concise way the Bible explains it.
Posted by AnneDroid at 20:40

What a creative analogy. I love the way you played with this concept.

But could not any faith align themselves to the 'Borg' analogy?

Annie - Have you ever watched Battlestar Galactica? (The new version, not the 70's schlock version.) I think you would find their take on religion extremely interesting.

Kingmagic, this isn't the BBC! It's my blog and I don't feel under any compulsion to keep saying, "There are other religions available"!! At work I ensure I work in a totally fair way and have, for example, been spending a lot of time this week arranging worship opportunity for a Sikh prisoner. But on my blog, I feel totally free to nail my colours to the mast about one particular faith and say it's the one I believe to be true.

Here is a link about Galactica that gives you some good information, especially the part on the religious references in the show.

The Church is like the Borg in other, not so good, ways. In TNG, the Borg were the ultimate baddies. Like the Christian church, they assimilated lots of civilisations. However, by ST:V the Borg had become wimpier. There were apostate Borg (like Seven of Nine) and the Borg even had to ally with Janeaway to deal with Species 8472. So like Church, the Borg suffered from schisms, apostasy and powerful external enemies. OK probably time to end the metaphor.

Oh my goodness, MOP, I bow to your superior knowledge of Star Trek! Do you have the Worf suit and do you go to conventions? But can I just say I am greatly amused by your comment on Nakedpastor about listening to the congregation saying the Lord's prayer and thinking it sounds like the Borg. I will now always think that in future though...