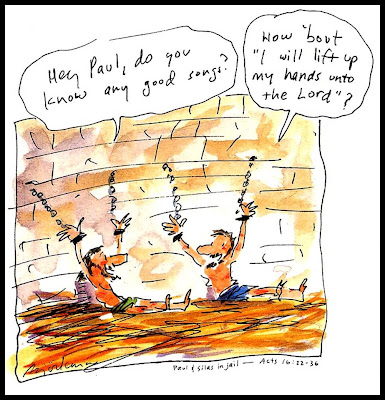 One of the most frequently repeated commands in the Bible is "rejoice!" It's often struck me that on the face of it this seems a funny thing for God to command people to do. Surely rejoicing is a reactive emotion which strikes us when we have something to rejoice about, and which it is unfair to expect of those who are in difficult circumstances? Yet there it is, over and over again. The command is to rejoice. And there are lots of remarkable examples of God's people rejoicing in the midst of hard times. I have come to the conclusion that God is not so mean as to command us to do something which is impossible for us, or at least that if it's naturally impossible then along with the command he's offering us his help to fulfil it.

I had to list in an email today the various aspects of what I do in the prison, and the meetings I have to attend, and I in a moment of shocking pride I was absurdly pleased to see the length of the list. Mind you a few of the roles on that list refer to meetings that only take place two or three times a year! The bread-and-butter day-in-and-day-out majority of my job is the emotional support of prisoners (and staff) of all religions and none on a generic basis. That's why I have a man-sized box of tissues on the desk! I'm thinking of having a "tea and sympathy" sign made for the door...

However almost as important to me (maybe deep down more important, I'm not sure) is the task of getting behind those of the prisoners who are professing Christians and encouraging them, teaching them, building them up and generally supporting them as they grow in their (usually quite new) faith.

There aren't a big group of them so I get to know them pretty well and some keep in touch by text messages when they get released. It struck me today what a lot of laughing we do together. And yet they're in jail, and some of them have very complex messy life histories outside and face the challenge of going out of jail with that new Christian identity which their old associates will be unlikely to understand at all. There's so much that could - even should - make them miserable and worried, and of course we do have some very sombre and serious conversations, but by and large they're a happy bunch! I saw this cartoon on t'internet and it made me think of them and smile.
Posted by AnneDroid at 22:04

Laughter is the great universal language and some of the "lightest" people I have known have been those with least to laugh about but who laugh anyway - you're work is so important - none of us know how we touch each others lives do we? we just have to try - I love you for trying

Sometimes, when I'm really down or stressed out, I spend time finding things to be grateful about. It's seems like just a "mind game," yet it almost always helps.

I think what you do is really admirable. I hope it makes a difference. And I've been in the position where you laugh sometimes under the most desperate circumstances, it keeps you sane. (I don't think I do it enough)

I like the tea and sympathy note, mine currently reads ' Things are getting worse, please send chocolate'

Genuine laughter is one of the most bonding human experiences.

I stumbled upon your blog. Great post! I love the picture. More importantly I think you are doing admirable work. I live in Honduras, and I would love to have a chance to minister to women in jail here. Maybe one day....