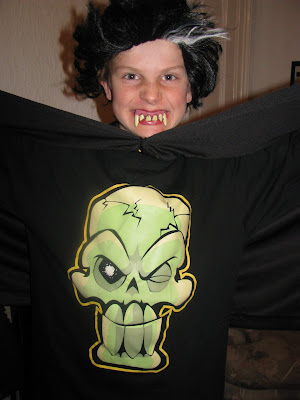 Isn't my son, Blue Eyed Boy, a handsome fellow? And Firstborn, and her two pals who're here for a sleepover are gorgeous too: 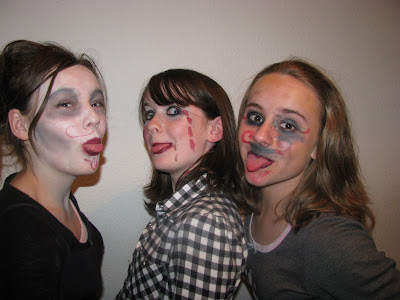 Some Christians are very opposed to Halloween and some see no problem with it. I've never been a fan, but as you can see I have mellowed in my old age and tonight we must have had a couple of dozen guisers at the door and I actually (shockerooney!) enjoyed it. I know all the arguments against Christians having anything to do with Halloween, and thoroughly respect them. I could argue them myself.

But I've - some might say "at last" - moved in the same direction as this article, particularly this quote:

"Should the forces of evil be mocked? Should Satan be laughed at? He most certainly should be. At the beginning of The Screwtape Letters, C. S. Lewis includes two telling quotations, the first from Martin Luther: "The best way to drive out the devil, if he will not yield to texts of Scripture, is to jeer and flout him, for he cannot bear scorn."

The second comes from Thomas More: "The devil … the proud spirit cannot endure to be mocked."
The one thing Satan cannot bear is to be a source of laughter. His pride is undermined by his own knowledge that his infernal rebellion against God is in reality an absurd farce. Hating laughter, he demands to be taken seriously. Indeed, I would say that those Christians who spend the night of October 31 filled with concern over what evils might be (and sometimes are) taking place are doing the very thing Lucifer wants them to do. By giving him this respect, such believers are giving his authority credence.

Not all believers should celebrate Halloween. For those who have been redeemed from the occult, Halloween in its foolishness may contain what was for them deadly seriousness. While their souls were in deadly peril, however, what they experienced were lies and illusions.

Romans 14, an amazing chapter in the Bible, should be our guide in this and many other controversial issues. As Christians we have to work some stuff out for ourselves and God expects us to do that with integrity and honesty, aiming to please him rather than do what's convenient or suits our selfish purposes. Once we've decided what's right/wrong, on the issues which the Bible doesn't spell out for us, we've to live accordingly. HOWEVER, what we haven't to do is judge our brothers and sisters for the different decision their reasoning has led them to. I think that's a fab thing about our faith. Things are not all prescribed in the minutiae for us. We're allowed to use the brains we've been given, and the process of trying to ascertain the will of God on an issue is really good for us. And we're encouraged to have a "Vive la difference!" attitude to one another, and live in such a way as our interpretation is not enforced, sharia-style, on other people.

I do admit I am quite an indecisive person. At least I think I am. Or perhaps I'm not. No, I definitely am. But I've come to like my indecisiveness. I'd be rubbish as a prison governor, because I'm not decisive enough. But seeing everyone's point of view is pretty handy when it comes to prison chaplaincy. I think. No it is, I'm sure of that at least.
Posted by AnneDroid at 21:46

I've always taken it as a fall festival, celebration of summer's end and the thankfulness of the harvest. The kids dress up in (non-evil) costumes, then off the the church for a carnival type atmosphere of games and candies or trick-or-treating when they were older. I understand the Pagan Celtic roots, but it's the intent that's important, I think.

Wonderful post, Anne! And that's a good article you linked to... Many thanks!