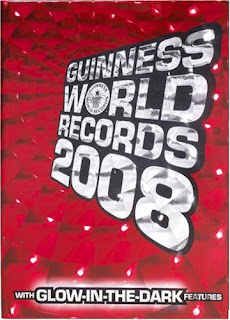 I was deleting lots of old emails recently at work to clear my inbox. Most of them were fairly boring and run of the mill, but then I found one from ages ago. It was sent to me by the previous governor. It is disloyal to my sex to publish it, and also to admit that I really liked it, but it's very funny. Here it is:

Car Parking: The smallest kerbside space successfully reversed into by a woman was one of 19.36m (63ft 2ins), equivalent to three standard parking spaces, by Mrs. Elizabeth Simpkins, driving an unmodified Vauxhall Nova 'Swing' on 12th October 1993. She started the manoeuvre at 11.15am in Ropergate, Pontefract, and successfully parked within three feet of the pavement 8 hours 14 minutes later.There was slight damage to the bumpers and wings of her own and two adjoining cars, as well as a shop frontage and two lamp posts.

Incorrect Driving: The longest journey completed with the handbrake on was one of 504 km (313 miles) from Stranraer to Holyhead by Dr. Julie Thorn (GB) at the wheel of a Saab 900 on the 2nd April 1987. Dr. Thorn smelled burning two miles into her journey at Aird but pressed on to Holyhead with smoke billowing from the rear wheels. This journey also holds the records for the longest completed journey with the choke fully out and the right indicator flashing.

Shop Dithering: The longest time spent dithering in a shop was 12 days between 21st August and 2nd September 1995 by Mrs. Sandra Wilks (GB) in the Birmingham branch of Dorothy Perkins. Entering the shop on a Saturday morning, Mrs. Wilks could not choose between two near identical dresses which were both in the sale. After one hour, her husband, sitting on a chair by the changing room with his head in his hands, told her to buy both. Mrs. Wilks eventually bought one for 12.99, only to return the next day and exchange it for the other one. To date, she has yet to wear it. Mrs. Wilks also holds the record for window shopping longevity, when, starting September 12th 1995, she stood motionless gazing at a pair of shoes in Clinkard's window in Kidderminster for 3 weeks two days before eventually going home.

Jumble Sale Massacre: The greatest number of old ladies to perish whilst fighting at a jumble sale is 98, at a Methodist Church Hall in Castleford, West Yorkshire on February 12th 1991. When the doors opened at 10.00am, the initial scramble to get in cost 16 lives, a further 25 being killed in a crush at the first table. A seven-way skirmish then broke out over a pinafore dress costing 10p which escalated into a full scale melee resulting in another 18 lives being lost. A pitched battle over a headscarf then ensued and quickly spread throughout the hall, claiming 39 old women. The jumble sale raised 5.28 for local boy scouts.

Talking about Nothing: Mrs. Mary Caterham (GB) and Mrs. Marjorie Steele (GB) sat in a kitchen in Blackburn, Lancs. and talked about nothing whatsoever for four and a half months from 1st May to 7th August 1978, pausing only for coffee, cakes and toilet visits. Throughout the whole time, no information was exchanged and neither woman gained any new knowledge whatsoever. The outdoor record for talking about nothing is held by Mrs. Vera Etherington (GB) and her neighbour Mrs. Dolly Booth(GB) of Ipswich, who between 11th November 1983 and 12th January 1984 chuntered on over their fence in an unelightening dialogue lasting almost 62 days until Mrs.Booth remembered she'd left the bath running.

Gossiping: On February 18th 1992, Joyce Blatherwick, a close friend of Agnes Banbury popped round for a cup of tea and a chat, during the course of which she told Mrs. Banbury, in the strictest confidence, that she was having an affair with the butcher. After Mrs. Blatherwick left at 2.10pm, Mrs. Banbury immediately began to tell everyone, swearing them all to secrecy. By 2.30pm, she had told 128 people of the news. By 2.50pm it had risen to 372 and by 4.00pm that afternoon, 2774 knew of the affair, including the local Amateur dramatic Society, several knitting circles,a coachload of American tourists which she flagged down and the butchers wife. When a tired Mrs. Banbury went to bed at 11.55pm that night, Mrs.Blatherwick's affair was common knowledge to a staggering 75,338 people, enough to fill Wembley Stadium.

Group Toilet Visit: The record for the largest group of women to visit a toilet simultaneously is held by 147 workers at the Department of Social Security, Longbenton. At their annual Christmas celebration at a night club in Newcastle-Upon-Tyne on October 12th 1994, Mrs. Beryl Crabtree got up to go to the toilet and was immediately followed by 146 other members of the party. Moving as a mass, the group entered the toilet at 9.52pm and, after waiting for everyone to finish, emerged 2 hrs 37 mins later.

Film Confusion: The greatest length of time a woman has watched a film with her husband without asking a stupid plot-related question was achieved on the 28th October 1990, when Mrs. Ethel Brunswick sat down with her husband to watch 'The Ipcress File'. She watched in silence for a breath-taking 2 mins 40 secs before asking "Is he a goodie or a baddie, then, him in the glasses?", revealing a staggering level of ignorance. This broke her own record set in 1962 when she sat through 2 mins 38 secs of '633 Squadron' before asking "Is this a war film, is it?".

Single Breath Sentence: An Oxfordshire woman today became the first ever to break the thirty minute barrier for talking without drawing breath. Mrs.Mavis Sommers, 48, of Cowley, smashed the previous record of 23 minutes when she excitedly reported an argument she'd had in the butchers to her neighbour. She ranted on for a staggering 32 minutes and 12 seconds without pausing for air, before going blue and collapsing in a heap on the ground. She was taken to Radcliffe Infirmary in a wheelbarrow but was released later after check-ups. At the peak of her mammoth motormouth marathon, she achieved an unbelievable 680 words per minute, repeating the main points of the story an amazing 114 times whilst her neighbour, Mrs. Dolly Knowles, nodded and tutted. The last third of the sentence was delivered in a barely audible croak, the last two minutes being mouthed only, accompanied by vigorous jesticulations and indignant spasms.

I would like to state for the record that my life in no way relates to any of these at all. I would like to state that, but I can't. The truth is I have been known to set off in the car with the handbrake still on. I can dither in a shop for a very long time and then put everything back and leave with nothing. And of all of them, "film confusion" is the category which Him Indoors would most agree applies to me.
Posted by AnneDroid at 22:53

These were hilarious. My favorite was the jumble sale massacre. And I too have been known to drive with the brake on. However, I'm pretty efficient in shops because I have two children who could disrupt proceedings at any moment. My film problems consist of talking to the characters on the screen. I try to curb this tendency, but it's one of the reasons we only see a film in the theatre every couple of years.

Just can't believe that of you, A-D! lol.

What are the three fastest means of communication?
1) Internet
2) Telephone
3) Tell a woman

Just what I needed this morning! :o)

Found my way over from Crazy Acres.