You're not here to enjoy yourself. However... 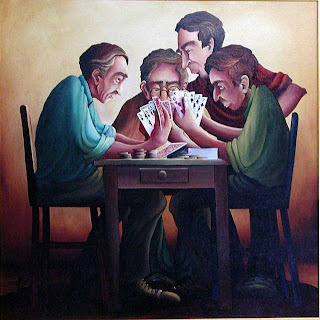 Recreation is defined by Wikipaedia as follows: "Recreation or fun is the expenditure of time in a manner designed for therapeutic refreshment of one's body or mind". I quite like that definition.

In prison, it's called "rec" and time for rec is built into the regime. The amount of rec is limited by a number of factors. Cost is one (the prison service is not rich). Security considerations are involved too, limiting the amount of association between groups of prisoners, and the size of the groups. Prisoners are notoriously their own worst enemies, and snooker themselves (excuse the pun) by, for example, tearing the baize on the billiards table. The gym is usually well used, though I sometimes worry that future victims of violent offences won't be very grateful to the prison service for aiding and abetting their assailant's muscle development. However, I can see that the gym has lots of advantages and is a Good Thing, on balance (that's not meant to be another pun).

In the jails in which I work, I realise now that I have the option, as chaplain, of creating the occasional "rec" activity. Anyone care to suggest serious or not-serious ideas for things I could do? My main limiting factors are: (1) my budget - I don't have any money to spend on it; (2) will guys who have to wear a mask of being "hard" and "cool" be willing to be seen dead at the event? and (3) the Big Paradox that we are faced with all the time - for some prisoners jail is awful and they never want to come back but for others jail is much better than their lives outside. For the latter group, we really don't want to make rec too wonderful!

However, notwithstanding that last sentence, rec is still important. All human beings need recreation. The clue is in the name - it re-creates us. I'm all in favour of prisoners not being allowed to lie in bed all day. I'm all in favour of work parties around the jail and, for those assessed as suitable, work placements in the community. I'm all in favour of education in prison too. Anything that will help them to change their ways and make plans for living legally and decently in the future. But they need rec too. Not because they deserve fun. But rather, for one thing, it takes their mind off taking drugs and occupies their time. And for another it gives them opportunities to practise social and other skills. If left to devise their own rec, gambling and other less desirable activities are likely to feature strongly. Idle hands and all that. Lastly, "training" prisoners to watch television in their cells for all their free time isn't really equipping them for life on the outside.

I'm thinking of a "Pub Quiz Without The Pub"! I may also be able to find church football teams willing to come in and play five-a-sides. Beyond that, silly suggestions (to amuse me) or serious suggestions (which I might use) would be welcome...
Posted by AnneDroid at 18:49

I'm famous in this prison for playing Scrabble with the inmates. It's been quite some time since I lost a game. But it always opens the door for conversation and building relationships.