If Jesus had been born in Glasgow... 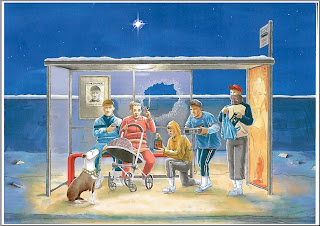 If Jesus had been born in Glasgow...
If you're from Glasgow, or probably anywhere in Scotland actually, you'll get this. Otherwise you won't. It's offensive, yes, but it's touching too, and funny and clever all at once. The bottle the guy in the yellow hoodie is holding is Buckfast wine - produced by monks and originally sold in chemists but now drunk by young teenagers on the streets. The reason I put it on the blog even though I suppose it's kinda blasphemous is that for me it says that Jesus came for this type of person too, and for all the many and varied types of people I come across in prison. The gospel's not for the posh only!!
Posted by AnneDroid at 23:43 1 comment: 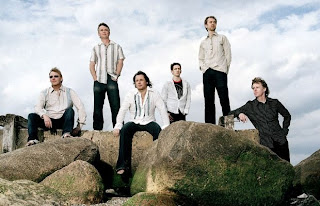 Last night I went to see Runrig in concert. It was fab. I'm not a huge fan to be honest, though I saw them once before in concert (about 20 years ago!) and I think the only song I could have named off the top of my head would have been Loch Lomond.
However! There's something really cool about live music, isn't there? Not only that but it was my daughter's first concert and I reckon she'll soon not want to be seen in public with me as she's getting to that age, so I realised I better enjoy it while I had the chance.
But above all it struck me that watching people do something they're good at and clearly enjoy is often inspiring whether their thing is your thing or not. Eric Liddell said when he ran he felt God's pleasure. I reckon God feels pleasure in seeing people using and developing and polishing - and ENJOYING - the gifts He has given them.
I think a lot of us fall down on the polishing bit - we want the gift fully formed, not self-assembly, flat-pack. Well I do, anyway. But that's not how it works, is it? Runrig clearly love what they do and what they do is fab, but they've practised a bit I reckon. I love my job but I can see that six months hasn't made me the polished article and patience and practice are what's needed!
Posted by AnneDroid at 19:53 1 comment:

Have you ever had one of these slinky toys that this happened to? I don't think they're fixable. I've tried! Some people's lives are in such a tangled mess that humanly speaking they are unfixable. Read on! 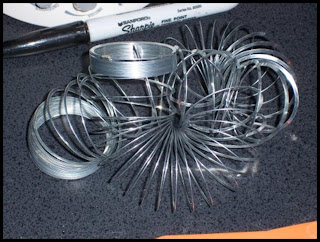 Almost all the services I have conducted over the past six months have been in the two prisons of I am now the chaplain. And it may or may not surprise you to learn that services in prison are not exactly like services in church. For one thing we don’t get huge numbers and for another people don’t sit beautifully quietly. But I really like services in prison and they’ve made me see bits of the Bible in a new light. For example recently we were looking at Ephesians 4, which for those of you like me who don’t know the Bible off by heart is a passage (written, incidentally, from prison) which says: “You were taught, with regard to your former way of life, to put off your old self, which is being corrupted by its deceitful desires; to be made new in the attitude of your minds; and to put on the new self, created to be like God in true righteousness and holiness”. (Ephesians 4:22-24)

That’s actually an amazing piece of God’s message – here it is in a slightly different version: “Since, then, we don’t have the excuse of ignorance, everything – and I do mean everything – connected with that old way of life has to go. It’s rotten through and through. Get rid of it! And then take on an entirely new way of life – a God-fashioned life, a life renewed from the inside and working itself into your conduct as God accurately reproduces his character in you”.

And then, since Paul likes the direct approach, he goes on to spell it all out: “No more lying then! … If you become angry, don’t let your anger lead you into sin, and don’t stay angry all day. Don’t give the Devil a chance. The man who used to rob must stop robbing and start working, in order to earn an honest living for himself and to be able to help the poor. Do not use harmful words…. Get rid of all bitterness, passion, and anger. No more shouting or insults, no more hateful feelings of any sort…. Do not get drunk with wine, which will only ruin you” – and so on.

I’ve read these words many times, and heard them read in church, but what an amazing experience to read them in prison. If you become angry, don’t let your anger lead you into sin – lots of your audience are in a prison service are in for violent assault or murder which was because they got angry and let their anger lead them into sin. The man who used to rob must stop robbing and start working, in order to earn an honest living for himself and to be able to help the poor. That’s a challenge for many who’re in for robbery or fraud. Do not get drunk with wine, which will only ruin you – lots of them are in for offences committed while drunk. Their lives are in a mess. And so, reading a passage like that in prison really makes it come alive – not because the rest of us aren’t sinners too but because the life change that’s demanded of these guys if they are to be Christians is so big, compared to someone who’s been brought up in the church and really just needs to kind of confirm for themselves that they believe what their parents and church has taught them all these years.
At the last but one service I did, a prisoner was just amazed by this passage and felt as if it was all written about him. He’s about my age now and he’s fed up with his life as he’s lived it up until now. He’s thrilled by this idea that you can put off your old self and put on a new self, and yet I can see that a bit of him doubts that such a thing is really possible. He yearns for it but he doesn’t just fully believe that it’s really possible. He wants this to be true for him but it seems impossible that it could happen.

Perhaps some of you might adopt that prisoner and pray for him – you don’t need his name because God’s got a note of it already – but pray that he will indeed be able to put off his old life of addiction and crime and put on this new life that he can see so clearly would help not just him but his wife and young family.

Why am I mentioning all this at the start of advent, when people read the Bible reading about Mary and the angel? Well, mainly because of what he said about wondering whether the change Ephesians 4 talks about and which he yearns for is in fact actually impossible because the answer’s in this bit of the Christmas story - it is that one line in the angel’s message to Mary, “For nothing is impossible with God”.

That's the key to it all really... lots and lots and lots of things are impossible for us but NOTHING is impossible with God. Even the apparently far-fetched and ridiculous, like the virgin birth. God made the rules and laws of nature so he can change them as he wishes. He can also untangle the tangled mess of a person's life, so they no longer need be sick and tired of being sick and tired of who they are but can become a new person. Impossible? NOTHING is impossible with God.
Posted by AnneDroid at 17:27 1 comment:

Yikes! I've got myself a blog. I'm so overwhelmed I'm off to bed to sleep on it - not literally on it obviously. I'll leave the blog wherever it is in cyberspace to await my return.
Posted by AnneDroid at 23:17 1 comment: