In this country we have moved a long way from the mindless ignorance of the past which I am just old enough to remember, in which people who were black, Asian or Chinese would be described in slang terms which they found offensive but which people didn't realise were wrong, and which were used by the most decent of folk. Certainly it was prejudice but at the ignorance end of the scale rather than the hatred end of the scale. I am so glad that we have, in this country, moved such a long way beyond that in my lifetime. I'm not saying we're there yet, but we've come a long journey and that's great.

When I was a student, I worked in a Chinese takeaway and got to know the guys, who were from Hong Kong. The guys who ran our local shop at the time were Pakistani Muslims whom I got to know well, too. I don't think a single one of our four children were delivered by a white British person and I couldn't care less (incidentally I deeply LOVE all those who were involved in the delivery of my children, even though I couldn't name them now!)

As I say, I'm tremendously grateful that we have moved so far as a culture. It was a joy to me that the BNP did so disastrously at the General Election. I am pleased that our kids are being brought up properly with regards to tolerance and respect (and better even than tolerance and respect, they barely even notice the colour of people's skin). 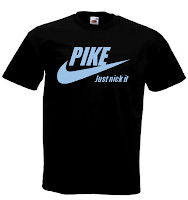 However, it has been bothering me recently that those of other cultures who don't look any different from the Scottish masses, in other words who have white skin, are still being subject to racial abuse.

Two examples are on my mind at the moment, particularly. I saw the teeshirt on the left on a website which sells teeshirts and hoodies with funny slogans (I fancied a new hoodie with a funny slogan but haven't found The One yet). The old me wouldn't have given this one much thought. However, I know a number of travellers, and am in general quite interested in the gypsy culture, perhaps because I love my caravan and could live in it if I was a single person. They have made me aware of how resentful they are, quite rightly, when they are called "pikey" or "gyppo" and when they are assumed all to be thieves. The Romany people, which some, thought not all, travellers, descend from, are an ethnic group who were treated brutally by the Nazis, who have their own language, and who should not be subjected to racism. No one should be subjected to racism.

I said there were two examples bothering me. The other one is the anti-English vitriole that Scots feel free to give vent to, especially, but not only, around football. In 1990, my friend Jean and I went to Turkey on holiday (pre-kids, back when I had a life). The Turkish people are generally friendly but we became aware that they particuarly liked Scottish people. Eventually we asked about that, and we were told that it was because if England play Turkey at football, Scottish holidaymakers will invariably support Turkey - which they of course like. "Anyone but England" is not, when you examine it, really acceptable though, is it?

Him Indoors and I grew up with the "Anyone but England" notion, the same as nearly all Scots. We are ashamed to admit that it's only in the last couple of years that we've even begun to feel vaguely uncomfortable about it. Seeing as poor old Scotland hasn't made it to the World Cup finals in South Africa, we intend to support England. This has attracted some derision, but we can cope! I was struck by this comment on Him Indoors's Facebook page by That Hideous Man: "In a year's time I will have lived in Scotland as long as I did in England. About the only thing I dislike about this country is the pitiful, and pathetic anti-English racism that rears its ugly head every time a ball-game starts. If you ask me, its a blight on an otherwise wonderful nation..." A couple of days later, I was told virtually the same thing by an English member of staff at work.

Is it just banter? That's what we're told. Whether it's anti-"Pikey" or anti-English, it's just a harmless bit of banter. But it's not harmless if it causes needless offence.

We've travelled such a long way in my lifetime in terms of our racial tolerance, but we're not there yet. We have to remember that all races should be treated with respect, even if their skin is the same colour as ours.

These are the two examples that are on my mind at the moment. But I could have mentioned the apparent acceptance in the media of hatred of the French, or of poking fun at red-headed people ("gingers") and don't get me started on bigotry (when I rule the world, Rangers and Celtic will be abolished. Glasgow United will be formed, and the spare players donated to Airdrie United). Don't get me started on sexism either - strong men are admired but strong women are despised as "ball-breakers"!

Jesus said we should love one another as He has loved us.
Posted by AnneDroid at 22:52 3 comments:

You know you can talk to me... 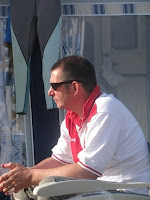 I had to interview Him Indoors while he pretended to be a prisoner in need of tea and sympathy. This was for an assignment for a counselling course I've been doing. I am hopeless at role play and try to avoid it at all costs, usually, but by the end of this I was quite believing that the man in front of me was not in fact my husband but a fictional prisoner called Willie Ross worried about his 14 year old stepson going off the rails and blaming his wife for being too soft with him. http://www.sendspace.com/file/xi6z2t This is the second half of our counselling session.
Posted by AnneDroid at 17:28 3 comments: 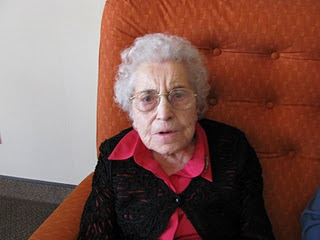 My grandmother died earlier this month. She was 103. On Wednesday we had a lovely funeral service and celebrated a long life well lived. She was a very remarkable woman. Brought up as a farmer's daughter, studying at university in the days when not all young women had such an opportunity, a life as a primary teacher and a wife and mother (of my mother), she was remarkable for her character. She had a phenomenal memory (I wish I'd inherited even half of her capacity to remember people and funny stories), she was a "grafter" who found it harder to relax than to work (I am the exact opposite, unfortunately) and she had wonderful honour and integrity and goodness.

Her faith was lifelong and it was appropriate that her funeral service was held in the same church she had worshipped in since the age of five when the family moved to the area. Of course she never lost "incomer" status, technically, as she wasn't born in the village! 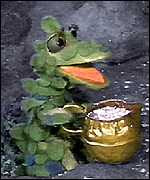 My parents, brother and I lived with her for quite a number of years, and benefitted from, amongst other things, the soup that she made EVERY day. We called her the "Soup Dragon" - behind her back obviously - after a character in the old BBC television children's program "The Clangers". Her soup was great, as was the clootie dumpling she always made for anyone's birthday, and the pavlova that appeared if we had visitors.

Having a member of the family live for 103 years is an enormous privilege. I have been so much more abundantly grounded (can you be abundantly grounded?) in stories of my heritage and I'm also very glad that our kids are all big enough to remember their great gran.

I've been thinking, too, about what it means to have been around since 1907 in terms of the changes there have been in the world since then. I can't quite get my head round what it must have been like to live through such changes. I'm old enough to remember the first computers people had in their houses (the ZX81 for example) and when calculators came out. I remember when there was no such thing as videos, never mind DVDs. My children can't imagine how we functioned without mobile phones. I saw the first moon landing on television (I wasn't even at school, I want you to know) and I was at the launch of the QE2 (in my pushchair). But compared to the changes and the events that my gran lived through, this is nothing!

Through Google Images I've been looking at some photos of 1907, such as this car, a Ford Model R (the famous Model T was yet to come), and this tram at Edinburgh's Tollcross.

And I've been looking at 1907 in general (I love t'internet). For example, in March 1907, a month before my gran was born, the parliamentary elections in Finland were the first in the world with woman candidates, as well as the first elections in Europe where universal suffrage was applied. 1907 saw the birth of John Wayne and Daphne du Maurier. It was the year in which Robert Baden Powell led the first scout camp (on Brownsea Island in England) and the year in which the first taxicabs with taxi meters began operating (in London) as well as the year of the second Hague Convention.

My gran was born in the decade in which Orville and Wilbur Wright were getting us off the ground, and in which Einstein and Freud were proposing theories of relativity and psychology respectively. Picasso introduced cubism to the world the year my gran was born and plastic was invented two years later. For some reason the fact that my gran was born two years before the invention of plastic amazes me more than anything!

I knew my gran wouldn't last for ever, and she was ready to go, but an irrational bit of me secretly thought that as she'd always been there, she always would be. So I'll miss her, but I'm glad she's free at last from her frailty, and enjoying eternal life instead.
Posted by AnneDroid at 20:37 6 comments: