I Spy With My Little Eye

Did you ever learn a new word and think, "I must see if I can fit that into a conversation this week?" I learnt a new word today but thanks to blogging I can create my own post about it. My new word is "panopticon". Perhaps I'm the last to know it, but if not, you can now know it too!

Jeremy Bentham (1748-1832) was a Utilitarian philosopher and theorist interested in British legal reform. He proposed the PANOPTICON as a model prison. The word means "all-seeing" and the idea was to create an architectural design for prisons and "mad-houses" that would work in terms of twenty-four-hour-a-day surveillance.

Cells would all be visible all the time from a central tower but the inmates of the cells would be unable to see whether the guards were looking in their direction or not. This uncertainty, Bentham reasoned, would encourage prisoners to behave themselves.

A French philosopher called Michel Foucault wrote about "panopticism" (another new word!) in 1975: "Hence the major effect of the Panopticon: to induce in the inmate a state of conscious and permanent visibility that assures the automatic functioning of power. So to arrange things that the surveillance is permanent in its effects, even if it is discontinuous in its action; that the perfection of power should tend to render its actual exercise unnecessary; that this architectural apparatus should be a machine for creating and sustaining a power relation independent of the person who exercises it; in short, that the inmates should be caught up in a power situation of which they are themselves the bearers". 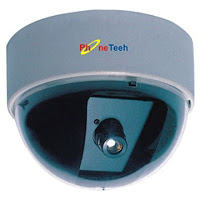 Panopticon jails haven't really taken off worldwide. However, doesn't what Foucault wrote just make you think of all the furore about CCTV cameras, and speed cameras? Plus ça change, plus c'est la même chose. It'll soon be Big Brother season on television again, too.

I know it upsets lots of people but I don't mind big brother watching me, within reason (I mean I don't want CCTV spying on me at the loo or anything and one of these days the speed cameras will get me I suppose). But in fact, mum and dad, I always wanted a big brother. In general I tend to the view that if you're law-abiding you have nothing to fear but I know that's not a trendy viewpoint. Recently Him Indoors and I were victims of crime when our bank account was emptied. I am quite glad that some "nosey" surveillance person at the bank noticed an odd expenditure and phoned us up to ask us about it. I'm also glad that the bank refunded us the money.

Incidentally "panopticon" - I dare you to try to use the word in conversation over the weekend - was a word I came across while doing some training today about "intel" (intelligence) at work.
Posted by AnneDroid at 20:53

Um, I don't know if I'll manage to use panopticon. But I have a bit a trivia about Jeremy Bentham. Did you know his body is preserved and on display in a cabinet? It amazing what i've learned being a textbook editor.

"panopticon" how can I use that in my blog or in common language? Thats quite a challenge!