My cyber-friend, Ruth tagged me with this meme on Wednesday and I've thought about it off and on since:

Books are scarce in the world. They are illegal in some provinces. They are not easily replaced, if not impossible to replace if lost in many if not most circumstances. If you can replace a book or buy one, it is usually through the black market at astronomical costs that you cannot afford. Yet you have been able to maintain one of the best collections in the world. If your entire library was about to burn up (think of the firefighters in Fahrenheit 451 invading your home) and you could only have one* book to take with you other than the Bible, what would that be and why?

Simple Rules: Answer the question. Offer one quote that resonates with you. Tag five people whose response is of genuine interest to you and inform him or her that they have been tagged. Cheers!

*And it cannot be an entire series of something, that’s cheating.

In my thinking about this, I have tried to come up with something that would be really impressive (and failed). So I've decided to go for honesty instead - honesty being the best policy and all that.

Probably my all time favourite book other than the Bible is Pride and Prejudice by Jane Austen but I would have no need to take that as I probably have most of it off by heart now. Although various books have obviously influenced me or moved me or entertained me as an adult, I think it's the ones you love as a kid which end up the most precious. So, leaving aside The Famous Five by Enid Blyton and Milly Molly Mandy by Joyce Lankester Brisley, and remembering with shame that so many of the books aimed at girls then were about orphans that I wished I was an orphan (I don't now, mum and dad), the winner hands down is Anne of Green Gables by L.M. Mongomery. (Most of you will now have run for cover!) 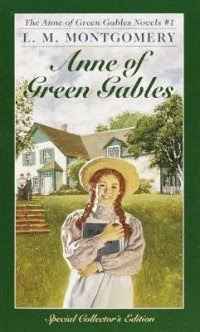 Maybe it was just because she was another Anne (a manager in a place I worked in the eighties, in the days of Adam Ant style frilly shirts, used to call me Anne of Greengairs - Greengairs was a village near where I lived at the time). But I think I just identified with things about her - she's a total dreamer and so am I. Actually I think I'm more like her now than I was then, which is either worrying or just reflects that after all it was an adult who created the character. Anne also wants a world where everything is lovely. So do I. Well we all do, but I don't even watch gory films. I'm a wee bit of a romantic but I disguise it well. 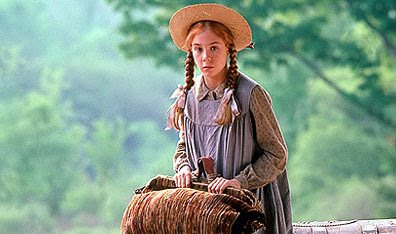 "Isn't it splendid to think of all the things there are to find out about? It just makes me feel glad to be alive--it's such an interesting world. It wouldn't be half so interesting if we know all about everything, would it? There'd be no scope for imagination then, would there?" Maybe Anne would have loved blogging - so many different kinds of lives to read about...

"Marilla, isn't it nice to think that tomorrow is a new day with no mistakes in it yet?" I call that "hope".

"There's such a lot of different Annes in me. I sometimes think that is why I'm such a troublesome person. If I was just the one Anne it would be ever so much more comfortable, but then it wouldn't be half so interesting." I don't like routine. My handwriting changes a lot. Kind of fits with this I think.

"It's all very well to read about sorrows and imagine yourself living through them heroically, but it's not so nice when you really come to have them, is it?" Too true.

"Look at that sea, girls--all silver and shadow and vision of things not seen. We couldn't enjoy its loveliness any more if we had millions of dollars and ropes of diamonds." I LOVE scenery, certainly better than money, though money's useful if you want to buy something.

Anne always remembered the silvery, peaceful beauty and fragrant calm of that night. It was the last night before sorrow touched her life; and no life is ever quite the same again when once that cold, sanctifying touch has been laid upon it. *SHIVERS*

"What a splendid day! ...I pity people who aren't born yet for missing it. They may have good days, of course, but they can never have this one". Sweet!

There is no blood and guts in the Anne books. No car chases. Not even any real baddies. The closest is Mrs Lynde, a crabbit old neighbour. The next two quotes involve her:

"Mrs. Lynde says that sound doctrine in the man and good housekeeping in the woman make an ideal combination for a minister's family." Yikes! I'm letting the side down in this family.

"It seems so funny and horrible to think of Diana's being married," sighed Anne...
"I don't see what's so horrible about it, when she's doing so well," said Mrs. Lynde emphatically. "Fred Wright has a fine farm and he is a model young man."
"He certainly isn't the wild, dashing, wicked young man Diana once wanted to marry," smiled Anne. "Fred is extremely good."
"That's just what he ought to be. Would you want Diana to marry a wicked man? Or marry one yourself?"
"Oh, no. I wouldn't want to marry anybody who was wicked, but I think I'd like it if he could be wicked and wouldn't. Now, Fred is hopelessly good."
"You'll have more sense some day, I hope," said Marilla. Hee hee. Me too, Anne.

Oh, now I've to tag some others. Feel free to ignore this you folk but I'm tagging you, Holy Famoley, Shannon, Noddy, and Tom.
Posted by AnneDroid at 20:28

Oh, I love your choice, Anne with an E. I led a deprived childhood and didn't read (or even hear about) these books. But I've watched the video version over and over and over, and I've read a couple of the books as an adult. I love the whole concept of kindred spirits and have several friends I regard that way.

Pride and Prejudice is one of my favorites too. I think I like your taste in books. :-)

Too hard to choose just one. But if I really had to it would probably be Skallagrig by William Horwood. Can't find it just now so no quote (and I know you didn't invite me to take part but heh! that's the joy of blogs!) and I won't even tell you what it's about because that would spoil it. Just get it if you can and read it!

Oh I'm glad you did, revruth. Other suggestions also welcome. I'll look out for the book you mention.

Please don't think I'm ignoring the fact that you've "tagged" me. I'm really struggling with the "just one book" - thing. You see, I am a book junky - obsessive compulsive when it comes to reading material.
But I really am trying to come up with one.

I don't know that I'd even take the bible with me. As grandly as I can talk about it, I don't pick it up for casual or other reading. I'd much rather read the stories of people's lives and how they get to know great truths--and that isn't always in reading a book.

I would like to have along "The Life You Save May Be Your Own" by Paul Wylie. And maybe "My Life with the Saints" by James Martin. Maybe a poetry anthology.

I can never get into Jane Austen's books, though I enjoy the movies made about them. And I tend to read "Little Women" about once every ten years.