Today isn't for the Faint Hearted 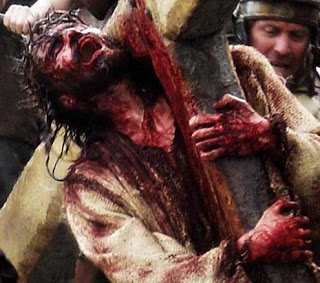 Christmas Is Really For the Children, by Steve Turner

Christmas is really
for the children.
Especially for children
who like animals, stables,
stars and babies wrapped
in swaddling clothes.
Then there are wise men,
kings in fine robes,
humble shepherds and a
hint of rich perfume.

Easter is not really
for the children
unless accompanied by
a cream filled egg.
It has whips, blood, nails,
a spear and allegations
of body snatching.
It involves politics, God
and the sins of the world.
It is not good for people
of a nervous disposition.
They would do better to
think on rabbits, chickens
and the first snowdrop
of spring.

Or they’d do better to
wait for a re-run of
Christmas without asking
too many questions about
what Jesus did when he grew up
or whether there’s any connection.
Posted by AnneDroid at 22:37 3 comments:

It's Friday, but Sunday's Coming! 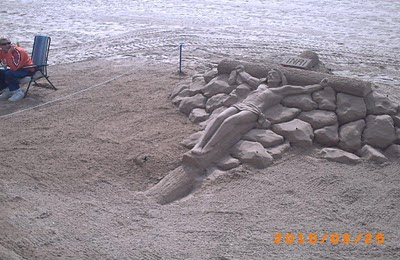 My friend Norma's mum and dad were in Benidorm recently and saw this. Amazing, isn't it?
Posted by AnneDroid at 22:37 3 comments: 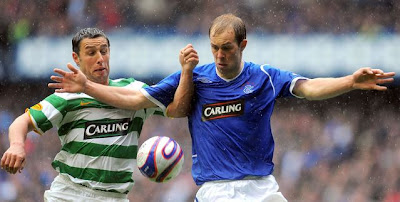 I've a fair amount of sympathy with the "religion causes wars" argument that is used so frequently by atheists. Obviously there's truth in it. Lots of terrible atrocities have been committed in the name of religion.

However I don't think it's ultimately persuasive. Christianity being the religion I am most familiar with, I'll use it as my example.

I come from a part of the UK where there is a lot of sectarianism. People from birth are told they are Protestant or Catholic. This, to me, is not religion at all but politics and tribalism. In my experience, those who are ACTUALLY Christians (whether Protestant or Catholic) are not involved in sectarian hatred at all. A Christian is a repentant sinner, aiming (though frequently failing of course) to follow Jesus' teaching, and to love God and their fellow man. Where I come from those who march in the Orange Walk or join paramilitary organisations are NOT those who love God and their fellow man and pitch up at church Sunday by Sunday.

It's tribalism, cultural indoctrination and politics that are behind so many of the bad things done in the name of religion. I agree that this is appalling but don't find it compelling as a pro-atheism/anti-faith argument.

There are bad apples amongst people of faith and atheists both.

However, in every town, village and city in this country, I know that Christian people (and no doubt other faith groups) are giving sacrificially of their time, their talents and their money to help their community, without thanks. Mums and tots groups, old folks' lunch clubs, youth clubs, social action campaigning, fundraising for third world causes, and loads more. Of course you can spot flaws in Christians. They're just human beings and aren't claiming to be better than anyone else (you can't become a Christian without humbling yourself to see your sin) but they're often really decent folk.

Atheists do good works too btw - I'm just saying I'm fed up with "religion causes wars" as an argument because I just don't think it holds water. SIN causes wars.

I put this argument earlier today to an atheist who replied by saying: "You raise a good point. I would suggest, however, that the same people would be doing good deeds in the absence of religion. I am an athiest who is constantly helping people and I volunteer for charities. I dont think you need religion or god for this."

I had already said that atheists do good works too and of course I wouldn't for a moment claim that only believers do good things. However, the great privilege of my job is that I meet guys who have come to faith following a criminal past. These individuals most certainly did NOT major in good works before becoming Christians!

Becoming a Christian can and does change people (including offenders) for the better and I have seen that with my own eyes.

I confess that I am by nature extremely cynical, which is why I have so much sympathy with atheists (it's pretty much a miracle God enabled me to be a believer at all given my personality - proof on its own of the existence of God perhaps). However the evidence that persuades me most if I start to doubt, is the evidence of a truly changed life. No, these offenders don't become perfect, and neither have I yet, but very often the change in them is absolutely astonishing.

And as a footnote for those of us born and bred in Churchworld, by and large these guys are entirely unfettered by all the pettiness of the institutional church and "get it" (the point of putting faith in God) FAR more clearly than many a seasoned (jaded?) churchgoer.
Posted by AnneDroid at 22:37 7 comments: