Life Without Caffeine Crumbles A Bit 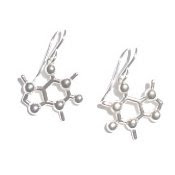 You can get caffeine molecule earrings apparently. What next? Don't answer that. Day two of Life Without Caffeine was yesterday and I felt really lousy all day. I had no energy for work and no concentration either. I also had a vaguely sore back on Thursday night, which by Friday night was an extremely sore back. This morning it was really sore, and my legs were sore too. In fact I thought I must have something else wrong with me. However I took a couple of Ibuprofen at lunch time and two cups of coffee (!) and I've been fine since (it's now early evening). I couldn't believe caffeine withdrawal could have been so intense.

Fortunately last night was fun in spite of this as we had four overnight visitors. We're so used to the kids having friends round for sleepovers at the weekend it was funny to be welcoming adult visitors. Cheese and wine and chat instead of popcorn and DVD/Wii! (Him Indoors and the four kids were assigned the tent in the garden which was still up from last weekend - we don't have any guest bedrooms). They were in town for a conference and needing a place to crash overnight. One of them was a minister who was in the year below me at secondary school many moons ago and in my year at university. He and his wife were married a matter of days after we were (we were at each others' weddings). They had their first child eight days before we had our first child and they had their second (of two) within a day of our third being born. The parallel lives thing has taken a sad but inevitable course. Our friend's father-in-law has recently died and my mother-in-law is terminally ill just now. Both cancer. 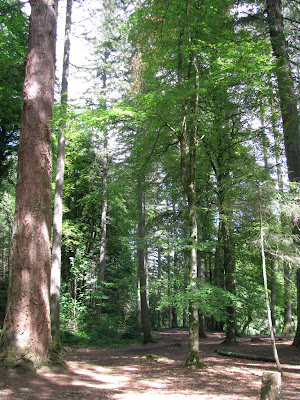 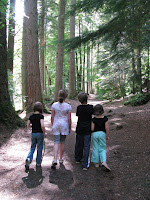 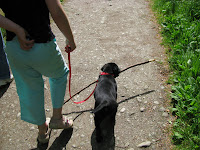 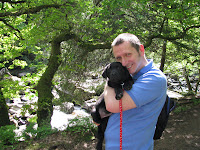 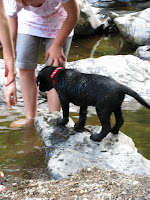 Today we introduced the puppy to our favourite venue for family walks. Her first walk and her first swim were accomplished in the one day (the latter unintentionally on her part). She had a lovely time. Here is the photographic evidence. She met lots of other dogs and got plenty of admiring attention. She got to carry a stick, briefly - she was a bit ambitious with the one she chose. It was a wee bit far for her at this stage so she also got carried for some of it. And now she's totally exhausted, fast asleep on top of a pile of laundry whilst her human "siblings" watch Doctor Who.
Posted by AnneDroid at 18:45

Oh, gosh, I'm sorry to hear about your MIL and your friend's FIL. So sad.

So life without coffee came to an abrupt halt today then? How many cups were you drinking a day? And was it real brewed coffee? We tend to drink the instant - being Brits, not really coffee drinkers.

I haven't given up the attempt on at least a temporary life without coffee, but I'm just not doing the cold turkey thing any more! What we need is the equivalent of methadone for caffeine addicts.

Speaking of walks in wooded areas . . . if you have the time and inclination, I've tagged you for a meme about summer over at my blog. If not, it's cool.

I think it's like anyhting you tyr to give up, you should do it slowly, a bit at a time.
I've been trying to give up somking for 10 years now!

I was thinking about you when I posted an entry at my new blog (Thruppenny Thoughts). I opted for reduction rather than elimination - a much better way of gaining control in my view.

Those aren't photos of Scotland. He's not wearing a kilt and there's no snow on the ground. You can't fool us!

Is that Him indoors, then?

I think that slow reduction works best, but some need cold turkey. I notice that if there is booze in the house, I drink it. If its not there I don't give it a thought.

Just off for a beer.

doorman-priest, technically, in this photo, it's Him Outdoors. Re the kilt, if it were up to me, kilts would be compulsory for all Scottish men - most men look more handsome in a kilt.

Do you have two sets of twins Anne or just children of similar heights and looks (admittedly from the backs of their heads!!)

Respect - oh mother of four.
I can see YOUR laundry basket now....

No, lynn, though others have thought so, too. It is a source of distress to the eldest that the next-eldest is taller than her (slightly) and has bigger feet. It is similarly a source of distress to the third that the fourth-and-last is taller than her and has bigger feet.
I can't see my laundry basket at all but I know it's under there somewhere!

Caffeine addiction shows up when a person cannot stop consuming caffeine in high amounts, causing his/her body to demand the substance and react negatively if that no caffeine is intake. Caffeine may not be addictive in the traditional sense, but the body builds up a tolerance over time; some people find it very hard to function well without at least one cup of strong coffee or tea in the morning. The stimulating effects of caffeine are caused by a central nervous reaction, the heart rate increases, blood vessels expand and the brain receives more oxygen. These caffeine effects can last for up to 8 hours, and once they go off then the body feels extremely lazy and slow as a side effect.

Caffeine addiction can even cause death, mainly because the abuse of any stimulant can cause high blood pressure or and heart problems, so if you abuse of it chances are you put yourself at the highest risk of a heart attack.

You need to be careful with caffeine withdrawal because it affects your overall health and therefore, you need to control your consumption of caffeinated products to prevent your body reactions to caffeine withdrawals. If you need more information about caffeine effects and caffeine addiction symptoms or prevention, please investigate a little further on this topics.

You can find more info at: http://yourcaffeineaddiction.com/