When Actions Speak Louder Than Words 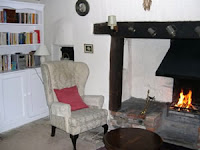 This is an old story. But I like it and it's my blog.

Once upon a time, a member of a certain church, who had been a very regular attender, stopped going. After a few weeks, the minister decided to visit him. It was cold outside and the minister found the man sitting at home in front of a roaring fire. No doubt the man knew exactly why the minister was there, but he invited him in and showed him to the big chair next to the fireplace, and waited for the questioning or the lecture, whichever it would be.

The minister made himself comfy but said nothing. In solemn silence, he stared at the flickering flames. A few minutes later, he took the tongs and picked up a small red-hot coal and laid it on the stone hearth. Then, he sat back in his chair, still saying nothing.

The host watched the whole thing with interest. As the lone coal's flame diminished, its colour changed from red to grey and soon it was cold and dead.

Still not a word had been spoken between the two men apart from the initial greeting. A wee while later, the minister took the tongs again, picked up the cold coal and held it back in the middle of the flames. At once it began to glow again, with light and warmth.

As the minister reached the door and was putting his coat on to leave, the man shook his hand and said, "Thank you for coming, and thanks especially for your fiery sermon. I'll be in church on Sunday".
Posted by AnneDroid at 21:34

I never heard that one before. It's a great one!

Quite brilliant. Luv it!

Hi Anne - I just started my very own blog and you are mentioned in my first post. Connika (in Queensland, Australia) www.connika.typepad.com

Yes, I like it too. A good bit of homespun philosophy.

Noddy: the reason you can not have such wisdom is because you are a toy!

Doorman-priest you have clearly not seen Toy Story or Toy Story 2. There is lots of wisdom in those films!

anonymous - I'm truly honoured. I can't find your blog though.

Connika, I've found your blog after all. http://connika.typepad.com/connika/
Happy blogging.

Good story. We do desperately need each other.

That ia brilliant. I love it.
Very often no words are needed, just a look on someones face says it all.

Actions DO speak louder than words!

good story as long as the following assumptions are present:

the isolated coal is an accurate representation of the subject's decision to no longer attend.

the fire was a nurturing place rather than a consuming place.