Dementors and the Sunshine of an Indian Summer

Sometimes I think I picked the wrong country to live in.  Not that I picked it - I was born in it (I blame my parents) - but I suppose I didn't choose to leave it.  I really love Scotland.  Seriously.  It's a beautiful country, very beautiful in fact.  But (*whispers*) the weather isn't always wonderful, and it's not as sunny as I would ideally like.

This week we're having what we call an Indian summer though.  It's late September but the weather is lovely by the standards of this time of year. 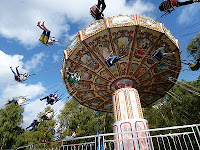 On Saturday I was with our church's Youth Fellowship group's outing to a funfair.  I suppose the kids would have enjoyed themselves whatever the weather, but the sunshine was a real bonus for us all.

One of the things I was thinking about during my time in the sun on Saturday was that sunshine really affects the mood of Scots.  It really does.  Some who read this blog live in sunnier climes where a lovely day is the norm and taken for granted.  You may not be able to understand this fully, but in Scotland it is honestly the case that people are by and large nicer and smiley-er and happier when it's a sunny day.  The converse of this is that a lot of people suffer in the darker gloomier winter months.  There is a condition called SAD (seasonal affected disorder) which is widely recognised and you can buy special lamps which mimic sunlight to help you through the winter.  Personally I often think it would be worth the investment for the government just to install these lightbulbs everywhere in shops and offices and "treat" the whole population for free.

On Saturday everyone was smiley and enjoying the autumn sunshine.  So was I.

As I enjoyed the sunshine, and thought about the spirit-lifting effects of the sunlight, I began to be reminded of various Bible references to light.

For example, Jesus tells us that he is the "Light of the World".     That's an echo of, for instance, Psalm 119:105 and lots of other verses in the Old Testament too.  Then Jesus says that we ourselves as Christians have a light-giving role for the world around us.  I think that's a really amazing statement by Jesus.  Do you notice that it's not a command, but a statement?  We're not being told to go and fulfil this duty that we feel, or don't feel, equipped for.  We're being told that if we're living in union with Jesus then we ARE (in spite of ourselves really) lights in the world around us.

Light lifts our spirits - sunny days in everyday life but also in a more metaphysical way.  I love the promise about heaven in the book of Revelation, and read it often at funerals, that says that one day darkness will be a thing of the past for those who're in heaven.

All those thoughts about sunshine and light inevitably made me think of what light is contrasted against.  The devil and his demons are seen in the Bible as dark forces.  Sin is described as deeds done/hidden in darkness.

The very talented writer J K Rowling, in her Harry Potter series, introduced us to various chilling examples of baddies.  Amongst the most horrible and creepy and chlling are the "Dementors".

This is how the character Remus Lupin explains the Dementors to Harry Potter:

" Dementors are among the foulest creatures that walk this earth.  They infest the darkest, filthiest places, they glory in decay and despair, they drain peace, hope, and happiness out of the air around them....  Get too near a Dementor and every good feeling, every happy memory will be sucked out of you.  If it can, the Dementor will feed on you long enough to reduce you to something like itself... soulless and evil.  You will be left with nothing but the worst experiences of your life".

I think this a powerful description of the effects of the influences of evil in the world.  Evil - and as a Christian I believe that evil isn't just the opposite of good but is an actual living power at work in the world - is all about decay and despair and death.  It's about sucking the life out of people until they are also soulless and evil.

When we're giving ourselves a check-up as Christians, and trying to assess where we're at exactly, one of the things we need to think about is whether we've got that sunny, life-enriching, positive, joyous, love-joy-peace-patience-kindness-goodness-faithfulness-gentleness-self-control attitude and way of being, or are we negative, life-draining, cold, Dementors, sucking the life out of other people. 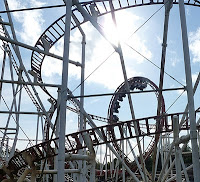 I am thankful, incredibly so, that I am a prison chaplain.  It is the most amazing job in the world, although it's a real old roller-coaster.  I love the prisoners and the staff.  I meet such interesting characters and their stories are fascinating, though sometimes harrowing to listen to.

What I have realised afresh is that I need to make sure I don't lose touch with the Light, so that I also (on a smaller scale) can be enabled by Jesus the Light of the World to be a light in the darkness that is prison.

I love working in prison, but it's a real old cess-pool of sin.   Please pray for chaplains and Christian prison volunteers everywhere that we will be able to keep ourselves on track in our faith and be always ready, willing and available to love unconditionally.  We're human beings just like the prisoners we work with.  Without God we're no better than them and may be worse than many of them.  Please pray that God will use us to be able to point folk in His direction... not just for the repair of physical ailments but for knowledge of and friendship with Jesus.
Posted by AnneDroid at 01:17 2 comments:

Once upon a time, a long time ago, I had the totally wonderful experience of seeing stalactites and stalagmites in a couple of caves in France.  I've never forgotten it, though I was only a teenager at the time.  I'd so love to have the wherewithal to take my kids to see them too.

This morning I was at our church's monthly prayer breakfast and was reminded afresh of that experience and at the same time thrilled by the wonderful parable/illustration that was given at the beginning of the meeting by the lovely Sandy, a (theoretically) retired minister who is a member of our church.  Sandy and his wife Ruth, who are two of my favourite people by the way, have just come back from a holiday in Northern Ireland where they also visited caves and saw stalagmites and stalactites.  They had also seen, as I did, that sometimes a pillar is formed when a stalactite and stalagmite join together.
(Incidentally, if you forget which is which, remember tights/tites come down and mites run up, but apologies for the bawdy tone suddenly introduced to this post).  :)
Sandy spoke this morning of how both stalactites and stalagmites form.  I've copied and pasted a bit from a website that explains it:
"These features are really very interesting. When the water level is lowered to a level below cave, the water entering the cave from above drips down through holes in the roofs. The Carbon Dioxide of the water is freed and the calcium carbonate dissolved in the water is deposited on the inside of the roof. The deposition starts forming in the shape and size of a ring. The ring continues to lengthen gradually. When the material of the water continues to deposit, the ring elongates down from the ceiling and hangs from the latter. The deposited material hanging from the ceiling are called stalactites.  The drops which fall on the floors also deposit their calcium carbonate. The deposited material slowly develops upward. It has a small depression at its top. It is known as Stalagmite. Sometimes these two features meet each other thus forming a pillar. Such pillars are known as cavern pillars".
He then went on to draw out a powerful illustration from that which I for one found very helpful and challenging.  Stalagmites don't grow upwards from sloping ground.  The ground needs to retain the deposits and not let them drain or run away.  For a pillar to be formed, there needs to be something from above and something from below.
In Scottish churches we have a phrase, "pillars of the kirk", which we use to describe certain folk in our congregations without whom we can't imagine we could carry on, people who live out their faith so fully and who can shoulder trust and responsibility in such a way that they become as key as actual pillars in a building.
Pillars don't just happen automatically, either in caves or in churches.  There are certain prerequisites in both cases.  In caves, these are as outlined above.  In churches they are, Sandy suggested, kind of similar.
From above, there is what God sends us and gives us through Jesus' coming to earth to live and die for us, through the Bible, and through the Holy Spirit.  From below, there is the need to retain the deposits and not let them run away.
I have rarely missed a Sunday service for the past 45 years.  Don't be too impressed!  My dad was my minister when I was a kid and missing church wasn't on offer - it was compulsory in our house.  My husband is my minister now, and although I honestly do love it and genuinely don't want to miss it, there is definitely the added dis-incentive to taking a Sunday off that it might upset Him Indoors!  Perfect, or nearly perfect, church attendance is one thing, but how many sermons I have retained is another.  I'd really rather you didn't ask.
My stalagmite would have grown much more quickly had I retained more of what I had heard, and had I spent more of my time over the years in prayer and Bible study.
Sandy's illustration was a good reminder to work on that afresh.
﻿
Posted by AnneDroid at 22:58 No comments: