Water is amazing. It has lots of unique and very surprising properties without which life as we know it couldn't exist on this planet. We take it utterly for granted as there's so much around us, but it is such an unusual molecule.

Hydrogen Bonding and the Anomalous Properties of Water

Most solids expand when they melt. Water expands when it freezes.
Most solids are more dense than the corresponding liquids. Ice (0.917 g/cm3) is not as dense as water.
Water has a melting point at least 100 degrees C higher than expected on the basis of the melting points of H2S, H2Se, and H2Te.
Water has a boiling point almost 200 degrees C higher than expected from the boiling points of H2S, H2Se, and H2Te.
Water has the largest surface tension of any common liquid except liquid mercury.
Water has an unusually large viscosity.
Water is an excellent solvent. It can dissolve compounds, such as NaCl, that are insoluble or only slightly soluble in other liquids.
Water has an unusually high heat capacity. It takes more heat to raise the temperature of 1 gram of water by 1 degree C than any other liquid. 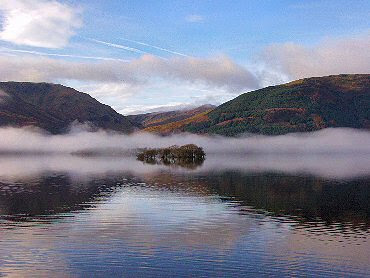 Because water is less rather than more dense in solid form, unlike the norm, we are in the fortunate position that ice on lochs doesn't sink to the bottom, killing off the plant and animal life and snookering the food chain.

Because of the great surface tension and some of those other properties, great big tall trees are able to defy gravity and suck water umpteen feet above ground to keep their leaves nice and green.

Amazing stuff, water, eh? You can wash things with it too. And make coffee of course... Apparently some people even drink it neat.
Posted by AnneDroid at 19:16

This was a fascinating science lesson. I haven't thought about stuff like this in a very long time!

I once heard that water can be very dangerous, as in drowning, which is when I took to Beer!

Never minid the science... that photo of the Loch is brillaint!

Yes, I wish I'd taken it rather than found it on Google Images!

Yes, rather like the "coincidence" that the Earth just "happens" to be the right size and the right distance from the Sun to support life.

Yet if anyone dares to suggest that there might be a Designer, the scientific establishment goes ballistic in its denial of any such possibility.

Thanks for visiting, Alfred of Wessex.

It is quite clearly NOT ALWAYS true that religious people=stupid people and scientists=clever people. I have academic credentials. I have a brain. I like science. But I have faith. I guess that's what I'm getting at with my post today (13th May) about being made to feel like a clown! Hey ho...