On Being Dubbed up in a Peter

On my first day in my job I asked a prisoner how he was getting on and he said, "Well, I'm dubbed up in my peter and I don't like it". I hadn't the faintest idea what he was talking about. Now I speak fluent "jail" (the other day, in fact, I was trying to tell a friend about a relative who has terminal cancer and is on morphine and I couldn't remember the word "morphine" at all - I kept wanting to say that she was on methadone, which is a word I hear every day). Anyway, for those of you in blissful ignorance, your "peter" is your cell, and if you're "dubbed up" it means you're sharing (doubled up). Most prisoners would rather have a single cell and so they eagerly follow the progress of other prisoners being liberated or shipped off to another jail, in the hope of getting their cell (rather like those who look at the obituaries in the newspaper to see if any council houses in their area have become vacant!) 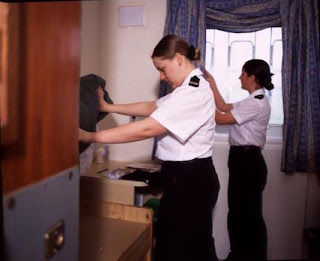 It's not just peace and quiet that's appealing about the single cell. If you have to share a cell, you have little say in who you share with, and it doesn't take much imagination to see that that is a scary prospect. Imagine this scenario: You don't take drugs/ you don't take drugs any more. You are keeping your nose clean in the hope of parole and all is going well. A drug-user is put in to share your cell with you. He hides his drug paraphernalia in the cell. The officers find it and he denies it is his. You can "grass him up" and perhaps be slashed for your trouble, or you can take the rap and endanger your parole/ be downgraded to a stricter regime. There are various versions of this story but it's a common concern in jail.

So, what's my point? Should all prisoners get a single cell? No, I'm not saying that at all. I'm not of the view that jail should be easy-peasy and delightful, though I don't think it should be degrading or dehumanising either. I just thought some readers might be interested (as I was) to think about another aspect of what it's like in jail. Especially for those of us reared on the happy banter of Godbur and Fletcher in the BBC series Porridge!

It ain't necessarily so in real life. Some ex-prisoners do a good job going into schools telling kids all the down sides of life in jail, and being dubbed up with Who Knows Who in your peter can definitely be a down side.
Posted by AnneDroid at 18:38

It is interesting to know what some of their concerns are. I can see why it would be frightening not knowing who you would end up with. I got nervous just over the issue of college roommates.

I went to visit one of my brothers in the county jail when I was nine (Mom was trying to shame him by bringing me--which I don't think was such a good idea), and I've never forgotten the smell. I guess there must have been a lot of soap dodgers there.

Can you imagine beeing closeted in a room with thirty soap dodgers? It's called teaching Year 9.

Seriously, though, I can't begin to imagine the stress of being in a shared cell with a total stranger.

As for soap...
I had a friend in HS who didn't avoid baths, but his feet smelled awful. He just got used to wearing shoes most of the time to not let the odor free.
Either his feet were like PigPen off of Charlie Brown, or he used stinky soap on just his feet.

Roland, I was trying to remember the name of the character "PigPen" from the Snoopy cartoons only today (in connection with one of my children who magnetically attracts dirt as soon as she leaves the house and sometimes even before). How funny to come on here and find the answer.

Ruth, isn't it strange how we can remember a smell so powerfully?

d-p, I couldn't be a teacher for love nor money. Give me a few hundred bad men any day. Much easier!

I think being dubbed up would be one of my major concerns if I were to end up in jail. It seems like a torture in itself, if you don't get a congenial companion.

No - jails should not be all sweetness and light, but surely they should be equitable, and they can't be if one pair of prisoners get along OK and the next pair drive each other insane.