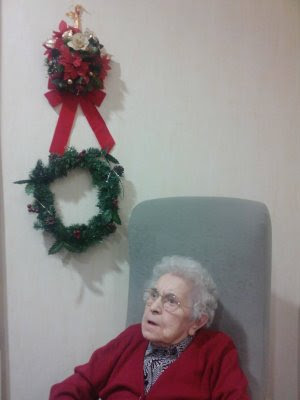 My gran was 101 back in April, so this is her 102nd Christmas. What a lot of changes have taken place in her life. Probably about as much change, in some ways, as in the 1906 years from the start of the common era until her birth.

And yet the changes are mostly to do with technology and gadgets. They are amazing of course. Even the developments in my lifetime are astonishing - I remember our ZX81 computer and how basic it was, and how the Commodore 64 seemed such an improvement when it came out. I remember my first calculator which was both enormous and expensive, and our big black bakelite telephones. When my gran was born it wouldn't have occurred to anyone that man would walk on the moon, or that we'd have this bizarre and wonderful world-wide web to access information and communicate so easily.

And yet, in other ways, nothing's changed at all. When I read stuff in the Bible written all those years ago, I'm often struck by how all the foibles and frailties and foolishness of the folk then are so similar to our own today. We still make all the mistakes we've always made and seem unable to learn from experience.

The delightfully cynical book "Ecclesiastes" says: "Generations come, and generations go, but the earth lasts forever. The sun rises, and the sun sets, and then it rushes back to the place where it will rise again. The wind blows toward the south and shifts toward the north. Round and round it blows. It blows in a full circle. All streams flow into the sea, but the sea is never full. The water goes back to the place where the streams began in order to start flowing again... Whatever has happened before will happen again. Whatever has been done before will be done again. There is nothing new under the sun."
I suppose that could be depressing but for some reason I find it oddly comforting. Last night I watched on television just a wee bit of a quiz about 2008 and was amused to reflect on how I'd completely forgotten about various things that we'd all been really worried about at the time when they were in the news earlier in the year. We panic about stuff so easily and fear that, to quote the favourite saying of Private Frazer (John Laurie), the miserable old Scotsman in Dad's Army, "We're doomed!".

Aristotle, writing about 300 hundred years before the birth of Jesus, said, "When I look at the younger generation, I despair of the future of civilisation". And yet here we still are, all these years later.

Either it's just dumb luck, or, as I believe, there's a Higher Power holding our metaphorical baby reins to stop us running out in front of a metaphorical truck.
Posted by AnneDroid at 15:57

Yes, sometimes I reflect with great embarrassment how scared I was of Y2K. We're good at panicking over some things and not seeing the big things coming. Human nature doesn't seem to change, which is why the gospel stays relevant.

I love the photo of your gran.

Thanks, Inspector. That means a lot, coming from you. Your blog is fab!

Ruth, Y2K is a perfect example of what I was talking about.

I sometimes feel the same way, terrified about the future generation, but it does not matter, and when we leave this plane of existence God is telling us that perhaps it should not matter to us. He is in control. Great post.

For some reason this springs immediately to mind!