Not so much Iron Maiden. More Old Wifie. 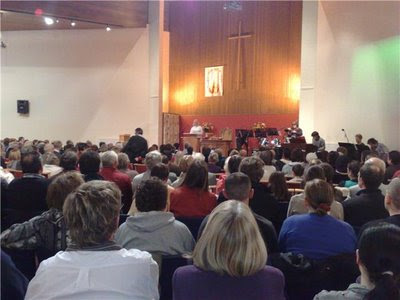 I got sent a picture of me speaking at a church service last weekend. A view of myself I never see. You can see the man I've offended walking out. (Kidding, I think...).

During that service, at one point we were asked to turn round and say hello to the folk around us. That's a good idea in many ways but I'm shy and often find it excruciatingly embarrassing - almost as bad as when you've to pass the peace in some churches. Anyway, since From The Inside is baring his soul re his musical taste, I thought I'd tell you this. During the greeting each other time, I turned round to find a group of young studenty looking guys. One of them had an Iron Maiden teeshirt on. I said, by way of making conversation, that I used to like Iron Maiden a lot and had had a poster of them on my bedroom wall. I can't tell you how amused I was by the look on his face of total and utter disbelief. It amused me all the way home and for several days until I realised this was not a Good Thing. Am I really so ancient-looking and so frumpy and middle aged that such a thing is really impossible to believe or imagine. Oh dear.
Posted by AnneDroid at 08:17

what a vastly amusing way to start my day!
thank you

you couldn't possiblt be as frumpy and middle-aged looking as er, .. Iron Maiden do these days....

Have you ever seen Keith Richards these days? You're fine, trust me.

I sure don't picture you all frumpy and ancient-looking!!
Hopefully that is consoling to you! :)

What a lovely, large, well-lit, warm (well it looks warm), full church with such a large number of people whose hair hasn't gone grey yet. Apart from that, so totally similar to my own ministerial territory. This time of year we open the doors to let the warmth in.

Thanks all. I feel better.

It IS a nice church, racingdemon, in both the building and the people sense, in the heart of a council housing estate. I've only been in it once before but I know the minister. This was a joint evening service for a group of churches.

It is probably because you used the word "used". When I was a teacher I would have other teachers come up to me and say things like "I used to have long hair and listen to heavy metal".

Age is all a state of mind! Don't convince yourself that you are old before your time!!

Mmm, Robb, that's a thought. I could ask Him Indoors if he'd mind if we had an Iron Maiden poster on our bedroom wall... (I was single when I did before). But as he was into Duran Duran and The Human League (and Samantha Fox!) in my heavy-metal-heyday, I would maybe need to allow him to have a poster too, to be fair.