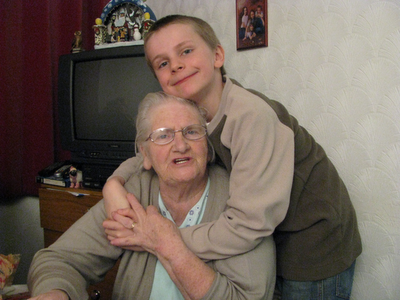 I'm sad to tell you that my lovely mother in law died this evening after a long and fierce battle with cancer. She was such a key figure in our family and will be very much missed. Her husband and one of her four sons were with her when she died; most of her relatives had been with her at some point today, but spare a thought for her oldest son and his wife who are trying to get a flight from New Zealand where they live.

She was one of the strongest, toughest people I've ever met, but in a good way, and was also one of the kindest, most generous people I've ever met, who would spend her last ha'penny on her seven grandchildren (she got six girls and a boy, after four sons!). She didn't understand the concept of having us drop in without being fed - in the end we gave up protesting. She would come for a meal at our house but would bring the meal with her (this may of course have beeen a sad reflection on my cooking but I think it was just her concern not to put us to trouble or expense). She was also a woman of strong views; she would bring her own teapot and milk when she came because she didn't like our teapot (it was earthenware and she liked a metal one she could reboil the tea on the stove with) and she liked "fresh milk" (i.e. full fat rather than semi-skimmed).

We all loved her very much and we will really really miss her. I'm glad to have known her.

One last thing - when Him Indoors phoned her (in early 2000) to tell her we were expecting our fourth child she was quite annoyed. "There's no need for that", she said. I am so glad she didn't always abide by her theories herself, since the son I got was the youngest of the four...
Posted by AnneDroid at 23:31

Love to you all, thinking of you. I know she will be sadly missed.

Anne, I'm so sorry. Condolences to you and your family.

Dear Anne,I am sorry to hear of your loss. I pray her memory will remain fresh and sweet to your memories of her always!
God Bless.
~mp

My prayers are with you and your family.

Sounds like a life well lived - the bitter-sweet of bereavement. My thoughts and prayers are with you all - particularly the seven grandchildren.

Gosh, Anne. I'm so sorry.
Reading this, B's mother 'came alive', as the description also fitted her! Nobody ever visited her without having one of 'her' cuppas. She would visit us and insist on doing the cooking!!! Best of all, she would bring her own bloomin' ashtray with her as we don't smoke!
B just came and read this and sends her sincere condolences. These lovely women were a breed of their own. God bless her.

Sorry to hear that - I hope you are all coping OK. Were either of you leading services this morning..?

You are all in our prayers.

With prayers for your family.

so sorry to hear that from you.


i even though is from singapore and know nothing bout you guys would like to say that she is a good woman i see.
( through that picture. )


may you be blessed with her departure.

Hugs to you all, will be thinking of you, and the in-laws who are struggling to get back - a situation I'm far too familiar with. Despite not knowing yourselves or her, it's evident she was quite a character - the grieving will still hurt, but it's nice when you can recall the departed with fondness and laughter.
j

So sorry to read that news. Thinking of you and your family.

So sorry for your loss. Hugs to you all.

Lots of love to you and Him Indoors and to your children at this difficult time,
praying for you this week,
love Lynn

My deepest sympathies to you and your family Anne. I am sorry for your loss of such a loved one.

I am thinking of you.

Anne - I am so very sorry for your loss. I just returned from NYC after the death of the father of a friend I have known for 33 years. I then come back to learn of a fellow liver recipient that I have known for about 12 years that also died.

This is turning into a bad week for both of us.

Anne, sorry to hear of you loss, she sounds like a spirited woman and will leave lots of precious memories of her life to you and your family..

Sorry Anne to hear about your loss.

Thank you so much everyone, for your kind comments. Him Indoors appreciates them very much too.

So sorry. She sounds great; a bit like my mum, who still ticks me off! A great generation.

Just catching up with my RSS feeds and this post stood out. My prayers are with you and yours.

Dear Anne
I was so sorry to hear of the death of your mother-in-law.
My condolences to both you and your husband.
Connika

My thoughts are with you, your husband and children in your loss.

May you all know the Peace that passes all understanding in your hearts, and may you experience the emotional and practical love of your brothers and sisters in Christ at this painful time.