This is interesting. So is this. Both articles are written by people not claiming to be Christians, describing themselves in one case as an atheist and in the other as "of no particular religion". And yet, for a change, they aren't full of the usual negativity and vitriole.

It's not that I don't understand negativity and vitriole when I come across it. I understand it just fine. I just get rather tired of it, and these two articles are so refreshing to read as a result.

I'm not arguing, btw, that the negativity and vitriole are anything more than a chronic minor irritation. I'm not saying they are painful - not as painful, for example, as my current ongoing dental problem (praise God for Ibuprofen) or that they amount to persecution. I liked this image: 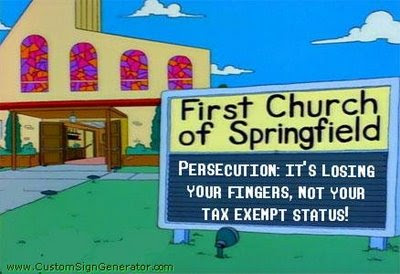 I don't actually mind being slagged off for my faith, or laughed at. I don't mind if folk think I'm bonkers. What would concern me far far more would be if I was being arrogant or pushy and deserving of the abuse. Spoiled mollycoddled Christians in the comfortable West too often scream persecution when all that's happening is that their own lack of grace has rubbed folk up the wrong way, and those folk have, understandably, let them have it in return.

On the other hand, persecution is real and alive on planet Earth, and I pray for those who're experiencing the true variety.
Posted by AnneDroid at 23:29

Have you not read the Poisonwood Bible?
j

No. Do you recommend it?

Thanks for sharing this post re the Matthew Parris article. It is because we at the Vine Trust take the approach of welcoming everyone and anyone that we discover many people are encountering the gospel of Christ for themselves, Often it is not through preaching but through example. Have a great new year and give Jim my best wishes. You are both in my prayers.