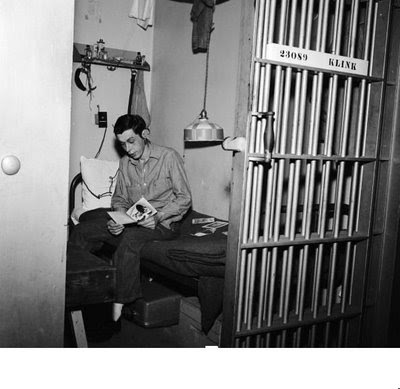 I was asked to write something for the prisoners' magazine, produced by and for the guys but with the aim of improving their literacy skills and computer abilities. I forgot until the very last minute so quickly dashed off the following. borrowing two old illustrations, adapting the first one from its wartime setting to the prison setting:

Christmas as it's now celebrated in this country is completely mad. It makes stressed people more stressed. It makes lonely people more lonely. It brings a lot of fun, especially for many children. But some kids dread Christmas because of what their life is like at home. "Dad will get drunk more". "Mum and Dad will fight more". "Everyone at school will be boasting about the presents they got and I won't be able to". And we all know that Christmas is hard for prisoners and their families.

As a Christian, I have to try to remember to see past all the madness of how we "do" Christmas in 2008, and try to think about what it was really about. There were no crazy shopping sprees or booze-ups the first Christmas - just a baby born to a poor couple, who were far from home and could only find a stable to stay in for the birth. But Christians believe that baby was the ultimate Christmas present of all time, to all of us. The baby Jesus grew up to be the adult Jesus who died on the cross so that we could be set free from our sin, forgiven and adopted by a loving father, God.

A guy once went to prison, leaving his wife pregnant. Some months into his sentence the baby was born. He didn't want the baby to be brought in to such a dark place, and it was a long way to travel anyway, so by the time of his liberation he still hadn't met the child, now three years old. While he was in prison, his wife had formed the habit of getting the wee lad to kiss the photo of his dad goodnight before he got into bed. On the day he was libbed, there was great excitement as dad and son met each other for the first time. Dad got to bath him for the first time and help him into his pyjamas. Together, Mum and Dad took the child through to his bedroom. But when Mum said, "Now kiss your dad goodnight", the child ran past his father and kissed the photo, leaving his dad with open, empty arms. As a Christian, I believe that if we do all the celebrating at Christmas and leave God out of it, we leave him with open, empty arms, as sad as that dad was, because he loves us.

A woman staggered into the lift in a shopping centre to take her to the car park. It was Christmas Eve and she was struggling to carry all the bags of stuff she'd bought. As the lift doors closed behind her, she turned to the other folk in the lift and said, "Show me the man that invented Christmas and I'll shoot him". "Too late, madam", came a voice. "They already crucified him".
Posted by AnneDroid at 23:49

I love these two stories! Particularly the prisoner story! I may pass them on...
~mp:)
Oh btw, you do have an accent like Billy Connolly...it is not a bad thing...but I thought he was Scottish?!;)

Two great stories. I hate that people often forget the reason for the season.

These are great stories! You did a wonderful job and hope they help the prisoners emotionally and in their literacy.