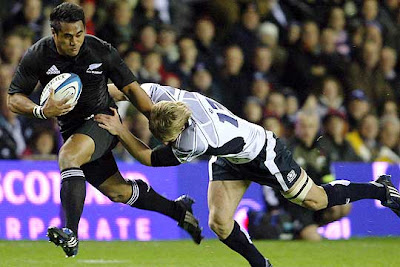 This was taken (not by me - I got it here) earlier this evening at the Scotland versus New Zealand (All Blacks) rugby international in Edinburgh. We took the children, and although Youngest Child was bored to bits, the other three thought it was brilliant, especially the Haka at the beginning. I love it too, not just because of the thirty muscly legs and fifteen impressive chests, honest. 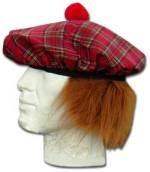 Firstborn wore her Jimmy hat (similar to the one pictured) and Blue-Eyed Boy wore his kilt, and a sporran. Strictly between you and me, said kilt belonged to my mother when she was a wee girl, but as it had first been her older (male) cousin's, we missed the grandma-owning-part out of the story when it was passed to him and he wears it with great pride. It was the kids' first visit to Murrayfield stadium and their first rugby international. Of course we were gubbed by the All Blacks. I say of course because we were expecting it, though obviously hoping for a fluky win. We did have some near-tries though and we could have lost by more considering the ability of our opponents. A chippy tea on the way home. Perfection.
Posted by AnneDroid at 21:56

I had to look up what a sporran was. The Haka originated with the Maori, didn't it?

Well now, it seems that Scotland must be feeling the same way McCain did on Wed. morning.

One of these days, I have to watch a full rugby match, as this was one of the games that influenced American football.

Sounds a great match. And fun for your family. The haka is always stirring.