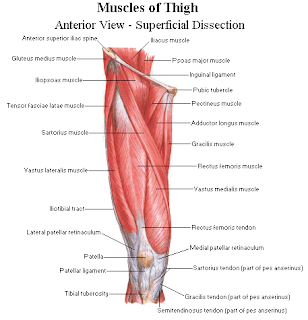 I have very sore muscles on the front of my upper legs today. I am walking about like a very old woman, rather than like a moderately old woman as I normally do. When I left school, in the eighties, I was planning to be a doctor (probably a missionary doctor overseas) and I went to university to study medicine. I only lasted two years. I'm so squeamish I can't even watch Casualty on television, so why I ever thought I could be a doctor is a mystery to me even now. In spite of my squeamishness where blood is concerned, I was fine with anatomy dissection (not so fine with anatomy exams mind you) and spent five terms, along with a small group of other students, dissecting a cadaver and looking at diagrams like the one on the left. I haven't looked at such a diagram since until today when I thought I'd see what muscles it was that were sore.

How did my legs get into this sorry state? Well, yesterday afternoon, I took it upon myself to go round 200 cells, putting an information notice under each door. Unaccustomed as I am to physical exercise (apart from the mouth - talking, and the fingers - blogging) the bending down and standing up has taken its toll. Poor me. I'll get over it though, probably by tomorrow, and it was well worth the pain. Last night we had a gig in the jail, courtesy of two bands all the way from the U.S.A., who're over for a wee tour of Scotland, facilitated by Next Generation Mission. I was very taken with these young folk. "Manufactured Defects" were fab. I didn't have much notice that they could come, so I was determined to get the word out to the prisoners, and to make sure they all knew. Hence the postal round, and the sore legs. We were competing with Celtic versus Manchester United on the telly, but it didn't kick off till 7.45, and the gig started at 7pm. 50 or so guys came and seemed to enjoy it. Even the officers were volunteering for duty on security at the concert rather than their normal back shift duties. It is so appreciated (by me, and by the prisoners) when people are willing to come into the prison without the reward of either money or publicity. There was nothing "in it" for these young folk, except I suppose that they add a prison gig to their C.V., but they came because they cared, and that was cool. A few of the prisoners, who weren't rushing off to see the football, got to stay and chat with the band over Irn Bru and Highlander Crisps. One commented to me afterwards, "That's the first actual American person I've ever met"!

Today, my sore legs and I, once I'd met the new admissions, went to a regional meeting of Baptist Ministers to talk about prison chaplaincy. Because of the short notice of the concert last night, I'd had no time to prepare anything but managed to waffle for the best part of an hour. It was lovely to be there with these really nice fellows, because the prisons and I were so thoroughly prayed for at the end. I really appreciated that a lot. I was a little bit worried about going as a "woman minister", although if that were really an issue they wouldn't have invited me. In my denomination, there are loads of us heretics but I don't know if there are any female clergy in the Baptist denomination in Scotland at all. Anyway lunch was served at the meeting, and before I left I did the dishes, just in case any of them thought that was my place! I have a secret soft spot for the bappies actually, but don't let on, please.
Posted by AnneDroid at 22:47

Oh, I've had sore legs from doing similar activities. It usually makes my hips really sore too. I hope you feel better soon.

And that's very cool about the band.

You poor old lady - still the pain was in a good cause.

Hey Anndroid - now that I know your TRUE identity (said in a Dr Evil type accent) its decent and good that you have a soft spot for the bappys :-)

Re: female ministers in the BUS - there's a few about - some in pastoral leadership in team ministries - in a Central Scotland area or in a former steel working town, some in hospital chaplaincy and sadly, a few who have had to migrate "doon sooth" to get a job. I don't really count as one because - after all - I Work With Children (and Families!)

Dear readers - I have now discovered that Anndriod's mum taught me Maths in second year - and was a STAR - the most gracious and patient teacher I have ever met (me and numbers just couldn't add up) and that I indeed have met Anndroid in the dim and distant past when we were teenagers. I *knew* there was something eerily familiar about the photos that I had seen that hinted at her true visage.....