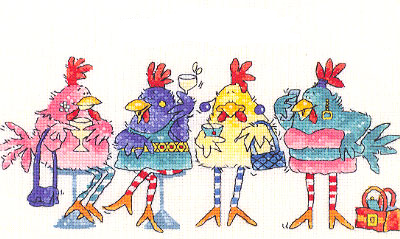 Last night I was at a friend's house for a Girls' Night In. Her middle child and our youngest child were in nursery together, which is how we met. Those I knew amongst the company were also mostly fellow mums befriended at the nursery or school gate. It was fab. Just fab.

Since I started full time work, Him Indoors does the school run. (By next year there won't be one, as they'll be able to walk unaccompanied - my babies!) But I do miss the school gate blether with my chums and it was great to see them again and catch up. I was there for five hours but the time just flew by.

I realise that most of my time is now spent in the company of males, both incarcerated and staff. Apart from my years as a full time mum and a spell as a hospice chaplain, my life has been like that a lot. I worked in a night shelter at one time and the staff were nearly all men, and the clients were all male too. When I worked, in the late eighties, for the Department of Social Security, almost all the staff my grade were male. We used to go out after work on a Friday to the pub sometimes, and it was a Real Ale bar, a very male domain, where I would alternate a half pint of cider and a diet coke for each pint they drank (I got to contribute a proportionately smaller sum to the kitty as a result!). When I left there and went to university to study theology, Him Indoors had already been there for a year and I joined his crowd - male again. I've never minded being "one of the boys", but not all the time, so last night was a lot of fun. I must organise something similar some time, although looking at the diary, it could be January at the earliest, and my snack selection won't be up to the standard Fiona achieves so apparently effortlessly.

My mum and her old school friends, by the way, have met up for a meal several times a year ever since they left school. I think that's great. Now they're all retired, they can go out for lunch at a restaurant, but they used to take turn about to host the group for an evening meal at home. I remember well the times when it was my mother's turn. My brother, dad and I would be fed in the kitchen, and my dad would be in a mildly bad mood. Not really a bad mood exactly, but I just don't think he knew what to do with himself. Once he had a workshop, he went and hid out there. He had a name for such an evening, which gave me the title of this post. He referred to it as the Hens' Convention. Cheek.
Posted by AnneDroid at 08:34

A good chance to read out your "female world records" posting from the other week, perhaps?

Thanks for stopping by my blog! I'm doing much better. :)

I've always had male friends more than female, although I work in a female dominated area (nursing). Men just seemed more simple to be friends with, or would that be less complicated? I suppose it's also because there were few females that were interested enough (or maybe crazy enough) to gallivant around rockclimbing, camping and scuba diving. Forget fashion and shopping! ;)
I've settled down some, and am starting to appreciate hen parties; well, as long as there isn't too much cackling or cattiness going on!!! (just kiddin'...I suppose it's just finding the right personalities to mesh together!) :)