And now the road report. 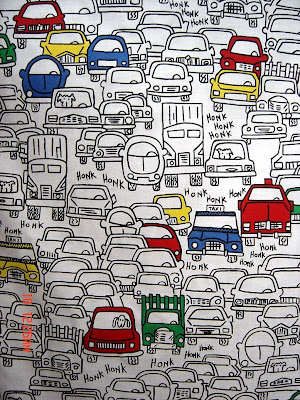 There was a big traffic jam on the way to work this morning, so my journey took twice as long as usual. I'd been in such a hurry to leave that I was only half dressed (the important half, don't worry).

On the way out, I grabbed my necklace, my prison ID badge on attractive navy blue SPS logo-ed neckstrap, my belt and my keychain, as well as a hairbrush, but failed to have any breakfast apart from a mug of black coffee. In the various periods of being at a standstill, I managed to put on said necklace, ID badge, belt and keychain, to find my mobile and call reception to tell them I'd miss my first appointment with the new kids on the block (new admissions), to brush my hair (again, now that it was dry), to wonder what Bear Grylls could have foraged for on the verge for breakfast if he'd been there, to notice that the lorry driver beside me (clearly equally bored) had wound down his window and sprayed his wing mirror with a cleaning product and was now polishing it, and lastly to compose the first part of this blog in my head.

On the way home on a Monday night (usually 8.30pm till 9.30pm) I always listen to the cool show hosted by Stuart Marconi and Mark Radcliffe on Radio 2. Tonight, a guy (who works on London underground, though that's not relevant) phoned in to make a suggestion for the "The Chain", and when asked what he'd been doing that day, he said he'd been looking after his 18-month old daughter and that he was gradually learning this song which contains all the countries of the world (well, nearly all of them according to Wikipaedia). He sang us the first verse on air. I'd never heard it before and thought it was great so have googled it now to share with y'all. But what I really loved was his motivation. He wants to learn it so that he can teach his wee girl, so that by the time she's four she'll have an advantage over her peers. Isn't that great? Good for him. (And good for her).

I wasn't in the car all day of course. I did spend quality time with some prisoners in between whiles. Yesterday I posted on my facebook "what are you doing now?" bit, that I was looking forward to another fun day in prison, and I got a comment back from a prison chaplain in Albania which said, "yes sister, that's right, a fun day and a love day. Give some love to those people". I have the best job in the world, when I think about it, that I get paid for this. I also (however) got to attend a five hour meeting. Admittedly one benefit of it was that the room was lovely and warm and I've not been properly warm for weeks. (When I was a wee girl we lived in a manse, and my dad would sometimes host meetings in our front room. I'd be in bed upstairs, and being slow to get to sleep even then, would hear occasional bursts of laughter coming from below. I didn't really know what a "meeting" involved but I thought it must be GREAT to go to a meeting. Be careful what you wish for, that's all I can say).
Posted by AnneDroid at 22:20

I got stuck in the traffic chaos on Monday morning (when the road works started). It took me two and a half hours to do a journey that'd normally take one. But to my great surprise I didn't get annoyed or frazzled - I just sat in the grinding queue enjoying the beautiful autumn day and catching up on a load of podcasts. (The outside temperature climbed 6 degrees while I travelled six miles in 90 minutes.) I managed to miss my first meeting of the day - which was no great loss.

But I am still left wondering how we manage to create such a lot of chaos every time there are roadworks in these parts.