From now onwards till the end of next month, the shops will be filling up with Hallowe'en stuff, including costumes like the one pictured. Fancy dress parties for kids are lots of fun. My dad always made my outfits and he was GREAT at it. I won prizes over the years for going as Zebedee from the Magic Roundabout, a Womble and "hauf killt" (half a kilt made from newspapers and the other half sporting various (fake) blood stained bandages - it's a Scottish pun which may lose something in translation...). Anyway that was in the days when you made costumes and they weren't always and only devils, witches and cats but anything you wanted. 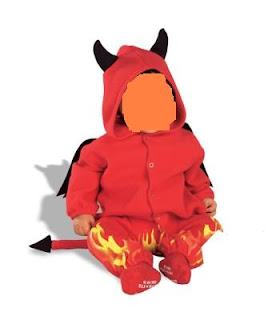 've got to admit that I sometimes feel uncomfortable seeing wee ones dressed as the devil. I'm not a total meany-pants. I let Penultimate Child be a bat last time, after failing to persuade her to be a cow-girl, but I draw the line at devil outfits. Not because the child will be in some way damaged by wearing the costume particularly, but because I think society as a whole is damaged by trivialising something that needs taking seriously. And yeah, I know some of you are thinking, "You're being silly, AnneDroid".

I believe in the existence of the devil, though, and I realise that most people buying these costumes don't. In fact they would think my belief was quaint and/or mad. Interestingly, though, and somewhat to my surprise, I was talking with a group of six prisoners this afternoon about the devil and not one of them for a moment questioned his existence. I guess they've seen more of his works than many. As I explained that the devil is described in the Bible as "father of lies" and that he hates us and is all about death and lies, there was no argument from any of them. When I used the example of drugs as an instrument he revels in to lead men and women to their death, one of them added "and drugs lead to lies too".

I guess at the sharp end, in prison, prisoners can sometimes see things more clearly than those of us who're caught up in materialism, image, minutiae of living, etc.. It's abundantly obvious to them that there is an evil power at work tempting us and lying to us and trying to lead us in the direction of death.

I once heard that the devil has two main tactics in the world. In our part of the world, the affluent west, he works by using the lie that he doesn't exist. Because people don't believe in him, they're not on guard against his attacks and he can do almost as he pleases and folk will be unprepared. They'll listen to his lies, not realising they're hearing any voice other than their own. On the other hand in other parts of the world, he works by having people totally beholden to him because of their unshakeable belief in, and terror of, evil spirits. Every single event in their lives is attributed to evil spirits and people with next to nothing sacrifice precious livestock to appease them.

But, much as I love my job, I often sense (and I'm not given to these things by any means - quite the reverse) the almost tangible ever-presence of evil. I suppose that presence is always with us but I notice it in jail. The Bible's description of the life of a Christian as constant warfare with the devil needs taking seriously. Those who think it's for weak inadequates don't realise it's in fact for those with b*lls who're willing to don the armour of God and get stuck in.

Violence is obviously part of the evil experienced in jail. Four things happened almost all at once before I began this post. First I read "From The Inside"s post about violence in prison. Then I read a comment from a prison officer called "angry dave", in a debate about sentencing on Nightjack's site, in which he describes being assaulted in the course of his job. While I was reading that (and in the absence of Him Indoors and therefore in possession of the remote control) I had on in the background "Prisoners Out Of Control", a cheery wee documentary from the US about some terrible prisoner-on-prisoner violence and jail riots. Then, for light relief, I turned to a repeat of the wonderful BBC tv series "Porridge" only to find it was the one in which Fletch throws the prison chaplain off the landing!

You're not a meany-pants. (Love that expression.)

I take the devil seriously too, although I'm not exactly sure what he / it is. But I don't doubt that there is a force for evil in the world, even though I believe God is ultimately stronger.

I'm not keen on dressing children up as the devil, but while I wouldn't do it, it doesn't disturb me too much when other people do it.

I guess I'm very much 'live and let live' on the subject of religion. I'm not in a church which approves of proselytising. I look on other religions and other branches of Christianity with as much tolerance as I can manage.

Yes, sometimes I struggle with that. Sometimes it can be difficult.

I once had a teenager show up on my doorstep on Oct. 31, dressed in a garbage bag that was covered with small boxes of breakfast cereal attached to it. Into each box, a plastic knife was poked. He was, of course, the cereal killer.

And I wasn't a prison chaplain yet then...

Hahaha Shannon. That was funny.

Those were good analogies, THM.

Thanks, Ruth and Jay,