Going to church with prisoners. 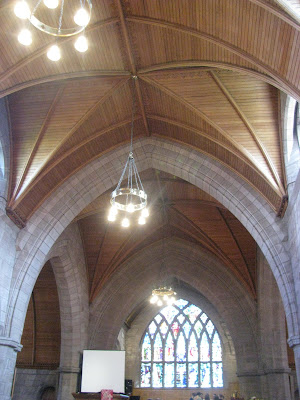 Today I was able to pick up four prisoners from jail and take them to a nearby church. (I surreptitiously took this photograph from my pew before the service began as it's a beautiful church). It's only the third time I've done it and it's such a privilege. Folk like me take the whole church going thing for granted but if you're in prison and have to practise your young faith in that unsympathetic environment where you feel like such a tiny minority, I suppose you have an extra level of appreciation for the simple freedom to go to church.

The other thing I've realised afresh (I already knew it) is just how weird Churchworld can be for the newcomer. Most Christian prisoners, it's fair to say, have begun their faith journey in prison and don't have a church background. Neither do some of the folk who turn up at my home church. I think we old timers in church need to strive not to be needlessly obscure in our language. As it happens I hate Christian jargon, and though I need to use some occasionally in order to speak, I try to avoid it as much as I can. The church we went to today is very accessible in style, which is one of the reasons I picked it. Another reason is that it's a resonable sized congregation. In a very small congregation, particularly an aging one, even though they were most welcome, they would stick out like sore thumbs!

One of the other things I've been doing recently is a task I really enjoy doing as chaplain, in the rare event I get the chance, is to "bridge the gap" for the Christian prisoner in the faith "part" of his resettlement into the community. This involves researching churches in the guy's neighbourhood and persuading the minister to adopt the guy pastorally and help him find his feet in the mysterious land that is Churchworld.

In the past, before I got this job, I had a ridiculously romantic notion of people being converted from a terrible life of drugs and crime and then overnight becoming amazing Christians with amazing ministries. I have learned that (obviously) it's not that simple or clear cut. Certainly there are many people who are amazing Christians who had that sort of background and usually, or often, there was a dramatic conversion. But a conversion is a mere beginning. And the "success" of the Christian life is all interwoven with the nurture and support of mature Christians and the fellowship of church over a long period. I didn't become perfect overnight. I haven't become perfect at all. I'm a work in progress. And the progress is slow. It's slow for us all. So, if you're the praying kind, please pray for our young-in-the-faith Christian prisoners whose faith is so fragile. Pray they'll make it.
Posted by AnneDroid at 20:54