No one could fault Chevy Chase's character in the National Lampoon films for the amount of effort he put in to his fatherhood, even though it went wrong, endlessly! 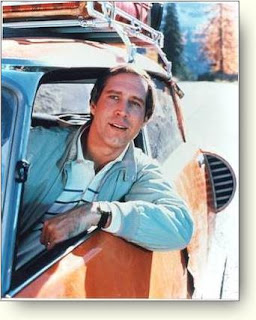 I haven't really ever had either the time or the opportunity, yet, to get into reading research into why offenders do or do not desist from criminal behaviour, but the little I've read, for instance this (chosen at random from Google's suggestions), always fascinates me.

My (extremely) limited understanding is that statistical research evidence would suggest that facing up to the responsibility that parenthood brings (or should bring) is one of the key factors contributing to SOME offenders desisting from criminal behaviour. If that's true, that's good and we should be building upon it.

My suspicion is, however, that many offenders are so damaged by their childhoods that their own nurture needs have not been sufficiently met that they are able to make the transition to the compulsorily unselfish role of nurtur-ER. To some degree that isn't their fault. Some of our prisoners are older than me but inside they're like wee boys, or at least teenagers - complicated further in a lot of cases (in my opinion) by the failure to resolve the normal "angst" process of adolescence because of the early onset of serious drug and alcohol misuse which has both numbed and postponed the maturing process.

The bigger question generally, faced by all governments, has to do with what should be done with offenders. Should we feed them bread and water and spend the bare minimum on them? My own view is that much more money should be ploughed into working with them, and also into researching desistance factors.

I do believe Jesus wants us to love prisoners because He wants us to love everyone. As I've said before, when I look at my detailed job description, I often think that "love the prisoners" effectively sums it up. HOWEVER, there is a more selfish argument that should appeal to all of us, Christian or not, for investing in rehabilitating prisoners, and in researching how best to do that. It's this: if we do try to help them to change, perhaps we won't be their victims in the future. And perhaps they will be better parents and their kids will be less likely to go down the same path.

Meanwhile, I certainly frequently appeal to prisoners to consider their children, and the example they are setting as fathers. I encourage them to imagine a happier future which they will one day look back on with satisfaction, knowing they've done the best for their child(ren).

I have a notice on my wall in my office which says: "Fathers! Kids need your presence, not presents". However, the first guy I tried to impress with it looked totally blank and I suddenly remembered he was dyslexic and the difference in spelling was lost on him. Oops. That'll teach me to be smart. There's another guy I've quoted it too on many occasions but he goes back to his mantra that he's been a good dad because he's always (even in jail) been able to make money and his daughter's never wanted for anything. She's fifteen and he's barely been out of jail her whole life. He really feels he is genuinely doing the best for her by keeping her in designer labels. It's sad.
Posted by AnneDroid at 21:11

It must be so frustrating trying to break the bad cycles. The image of these tough guys being little children inside is very telling.

First, I am blushing (and honored) that I inspired this post. I was having a little of a down day, and this provided a nice lift to it.

I can relate somewhat to what you are saying about those prisoners you have encountered that are more like little boys than men; their own childhood did not provide them with the opportunity to mature properly, for a myriad of reasons. I saw plenty of that on the streets of Brooklyn. The absentee father rate in the black community there (and in the US a whole) is still as appalling now as it was then. While this plays a role I am sure, there is the other side of the coin, that being single parent families, primarily run by women, who raise their kids well enough to avoid the pitfalls that you describe. Sometimes, good role models can exist outside the family unit as well, and I have seen evidence of this in my own personal experience with an EMT that I worked with.

"Meanwhile, I certainly frequently appeal to prisoners to consider their children, and the example they are setting as fathers. I encourage them to imagine a happier future which they will one day look back on with satisfaction, knowing they've done the best for their child(ren)."

While I think this is a good thing to do, the ever present cynic in me has to wonder to what degree of selfishness will prevent so many of these prisoners from being able to look past their own needs.

Can rehabilitation be accomplished? Yes, it can, and I have seen it done with someone I know. The problem, as you point out, is that there is no systematized program in place to accomplish this. while it will not benefit everyone, (there are many criminals that are just too hardcore) those that it can benefit are worth making the effort for.

I skimmed over that report, and a sentence towards the beginning caught my attention:

"The good news is that most juvenile delinquents are leading quite successful lives by the age of 32."

People make choices. The first commandment, Love God above all else, is the only one that is needed, since anyone who does love God would live with God in his or her heart.

Convicts are usually dedicated to themselves. Whether it is because of their damaged upbringing, drugs, alcohol, or just plain evil, it is not easy to figure out. No one can change unless they want to change.