Cheering each other on.

“…encourage one another and build each other up…” says God through Paul in 1 Thessalonians 5:11." Wouldn't the world be great if we all did that? I love Scotland a lot, but I can see that one of our character flaws is that we tend not to want to build each other up. Our cousins across the pond in the US seem to me to be genuinely pleased for folk when they do well. In this country we're a bit more prone to say (out loud or to ourselves), "Aye, but I kent yer faither", or "Don't be forgetting where you came from", or "Don't be getting above yerself". Often the only time Scots speak well of someone is when drunk "Oh, ah love ye, man. Yer ma best pal, man" etc, or during the funeral tribute/oration when it's too late for the praised one to hear the compliments.

I've been thinking about that this week as I've been watching bits of the Olympics.

Once upon a time a few years ago we were raising money for our new church building. As part of that, Him Indoors and another guy in the church decided to run a marathon. As all the marathons are on a Sunday, they thought they would just do their own. So the two of them ran the marathon, and a memeber of the congregation, who is a dentist, cycled along as first aider - the only kind of acceptable ailment that day would have been a dental one I suppose. Anyway two or three families from the church, including the Droids, went along to wait for them at one point on their route. Him Indoors often says that when he rounded the corner and saw us all waiting there he burst into tears! It meant so much at that point, when he was so exhausted, to have some support.

I was struck this week by a few of the stories of support from the Olympics.

For example, here in the UK, we've been very proud of young Tom Daley. Only 14 and out there in China diving in the Olympics. What a hero... Okay so he didn't get a medal, but just being there at 14 is amazing on its own. He's what my gran would call "easy on the eye" too - at least my thirteen year old daughter set the alarm on her mobile phone to get up and watch him. Here he is with his dad Robert: 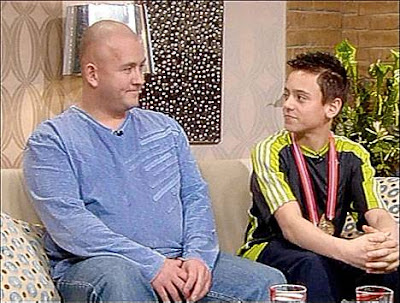 However, there's more to the story. In the midst of all the excitement of qualifying, Tom's dad Robert has had 80% of a brain tumour the size of his fist removed by surgery and the rest treated by other means to try to shrink it. On top of that it is interesting to hear of the great sacrifices of time and money Tom's parents have made to enable him to do so well in his diving career. I find it a moving example of true parental self-sacrifice. The other thing about Robert, as he freely admits, is that he is very prone to crying every time he sees his son perform. His emotional commitment is huge, and his delight and pride in his son. It's love, actually. 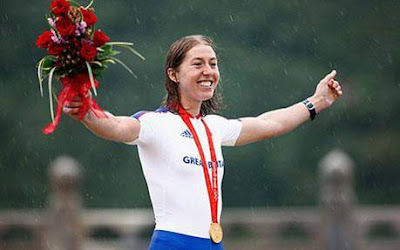 And lastly, the legend who is Michael Phelps, who's won umpteen gold medals (was it a hundred?) this Olympics. He is a hero, but it's this image that stays with me: 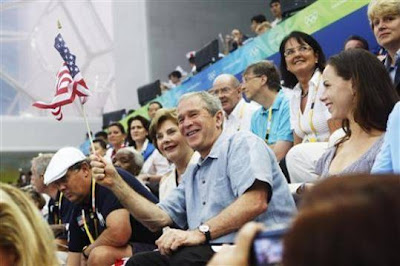 I just can't imagine having the president of the United States waving a flag and cheering for me. No need for me to try - it's not going to happen! Nor can I imagine having our queen or our prime minister waving a flag and cheering for me. I think that's amazing. But as I've reflected on it something even more amazing has struck me. From my reading of the Bible, I discover something astonishing. Indeed, who cares whether George Bush, Gordon Brown or the queen know nothing of my existence, because I have God cheering me on. God wants me to do well. Too often, subconsciously, I see Him as some kind of cop or prison warder out to catch me in the act of something wrong when in fact He loves me beyond my understanding of love. He's willing me to do well, to succeed. He's cheering me on, sometimes even saying "Well done, Anne. Today you got that right. I know you got it wrong on the previous 500 occasions but today you got it right and I love you and I'm happy"...

And then, because that's His nature, He wants me (and you) to adopt the same spirit. He wants me to build people up and encourage them. What we say to people has such power. In the them-and-us environment of Prisonworld, with staff and prisoners (screws and cons) it's great to be able to go in there with a counter-culture where we as chaplains see ourselves as forgiven sinners, of the same human ilk as staff and prisoners alike. It's great to be able to look for the tiny wee remnant of the offender which is the spark of the "made in the image of God" person that God potentially could make them. It's overwhelming sometimes but it's a huge privilege. Please would you pray for me as I try to build up and encourage those who've stuffed up thus far in their lives and who doubt themselves to be capable of ever being anything better.

And for what it's worth I want to cheer you all on too.
Posted by AnneDroid at 22:56

Lifting each other up in an authentic and meaningful way is the greatest gift we can give each other. Not in a prideful or boastful way - but just a gentle way of saying "I believe in you".

This is a terrific . . . and encouraging . . . post. It inspires me to be more encouraging.

I think it is something worth doing, but rarely remembered by people. That a word of encouragement is worth ten times the words of goading.

I am rooting for the olympics, to be able to represent your country is an honour and winning is not the all just the icing on the cake.

Schools going back already, sign summer must almost be over.