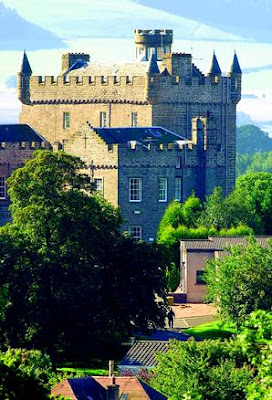 The Sun and various other newspapers seem to hate the Scottish Prison Service's open estate, referring for example to one of them, HMP Castle Huntly, as a "bouncy castle" and a "country club" amongst other things.
What is the "open estate"? It is the name given to two Scottish prisons which are open in the simple and obvious sense that they have no big fence and no walls.
They are controversial, there is no doubt, and particularly in the last week or so when we have heard the shocking news that a prisoner from the Open Estate who was allowed out failed to return, went on the run, and committed a very serious violent crime. My thoughts and prayers have mostly been with the unfortunate victim.
There have been a number of "absconds" from the Open Estate in my time but this is the most serious and alarming case by far. It has sparked off (yet) another round of calls for the end of open prisons.
However, I really hope that doesn't happen. And I feel sad for the many prisoners currently at the Open Estate who are working extremely hard, holding down work placements (sometimes the first time in their adult lives they have worked at all), or undertaking education, or winning a long-standing battle with addiction, or making plans for the future and committing themselves afresh to their partners and children. Certainly not all of them will succeed in living up to their good intentions, but plenty will, and they really deserve our respect for the distance they have travelled, often guys who have had an awful start in life.
Since starting work in the prison service I've developed a sudden interest in a genre of tv I would never have looked at before: "America's most violent jail"-type programs have me glued to the seat! Are there a lot more of these programs at the moment or did I really never notice them before? Even "Ross Kemp on Gangs" has me totally intrigued. This week there was another similar documentary on gangs in Glasgow and London that had me nearly in tears.
The Louis Theroux program recently on an American jail showed inmates who had sentences of over 500 years. Our tabloids would love most criminals to be locked up and the key thrown away. But we don't do that. Our prisoners are going to get out eventually. So, given that that's the case do we want them prepared for release or not? Do we want to release totally institutionalised people who haven't seen anything of the outside world for years, or do we want to re-integrate them in a staged way? I vote for the latter.
Now, some prisoners behave so badly in closed jails that they are not allowed to progress to open conditions, and of course eventually they are released anyway, but I don't think that negates the good that can be done for those who are able to make the progression and benefit from it. Also, the carrot of getting to the Open Estate with its Home Leave Scheme is an incentive to tow the line in closed jail.
I think of a man at the Open Estate whose drug history in the past was totally chaotic, who is into his forties and has spent most of his adult life in jail. Now? He's clean. He's established good relationships with his family (I think for the first time) and he's had a couple of home leaves. The first time he had one, he couldn't cope, totally panicked and took a non-prescribed drug (valium) to calm himself down. He came back to jail, failed a drug test, owned up, got counselling, and has since accomplished a couple of home leaves drug free and feels a whole new self-confidence. His story is not untypical. I am as confident as I could be that he will do well on release.
I could tell you lots of stories of success, and quite a number of failures too. But we're in the business of risk. And I get tired of the bad press. And so do the prisoners. And their families.
Do you know what I wish made the news on the average day? "Today across the Open Estate nearly 500 prisoners stayed in jail even though there is no big wall or big fence". But that kind of news doesn't sell papers.
Incidentally, if you read this in time, watch BBC1 at 12.30 tomorrow (Sunday) lunchtime - Castle Huntly is on Politics Today!
Ax
Posted by AnneDroid at 22:43

It seems to me that one of the main purposes of prison is to rehabilitate offenders and to do whatever is possible to ensure that they do not offend again when they are released. Inevitably there will be mistakes and scandals along the way. But that's true in every walk of life. This includes tabloid editors and national politicians who influence and design our policies.

The success stories and the diligence of those working in the prisons are never going to make headline national news, but they will make the world of a difference to the individuals concerned - and also to the wider social infrastructure.

The only alternatives that I can think of are eliminate all crime or lock all offenders up forever. But if we do that, where will we find the next generation of tabloid editors and politicians? ;-)