Oh look who it is! 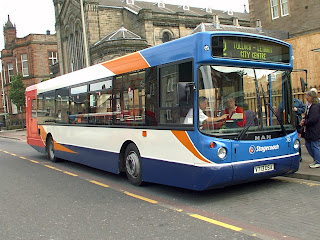 I took the kids to the cinema yesterday (to see Alvin and the Chipmunks if you want to know). We walked there and then we got the bus home.

As I was paying for one adult and four children and watching all the tickets come shooting out like a ticker tape parade, I heard "Hello, Anne!" behind me. I turned round and there was a fairly recently liberated life sentence prisoner I had come to know well!

A couple of weeks after liberation this man had phoned me at work to say he was missing jail. And yesterday he said that, over the first six weeks or so, he'd experienced a few panic attacks. He has found being out of jail very difficult. This is someone for whom prison is no punishment really - he is "jail-wide", which means he is so experienced in prison life he knows all the dodges and tricks. He knows how to get by in jail. He is looked up to by younger or more inexperienced inmates who come to him for advice. In jail, he IS someone, in a sense. Out of jail, he's - well, he probably feels he's a nobody. And the world has moved on, and he struggles. Alcohol's a big issue for him in the community whereas in jail he's not surrounded by the stuff.

If you're the praying kind, please pray for him. He used to come regularly to the services in jail but I wasn't always sure why! I would hate for him to resort to crime specifically in order to get back to jail where he feels comfortable. He lives within walking distance of our church and has promised many times to come "some time".

Good life experience story, Anne. It made think, how sad some people get comfortable in their life's lot even when it bad. But I am also reminded that even when St. Paul was in chains he was a free man.
Thanks, Anne

Isn't it wonderful to meet those you've ministered to on the "inside" now on the "outside." I've had that experience many times. I've also seen some who've become so institutionalized that they have a dufficult time functioning outside of the structure of prison. May the grace of our Lord and Savior be trulty sufficient for those we minister to.

We chaplains need to stick together :)

Having described what you believe is wrong with the present system because of the effect it has on some of the individuals you work with; will you be going on in future posts to outline what your alternative system would look like, and to justify this not merely in terms of how it would serve the needs of offenders, but also of victims of crime, the needs of wider society and a coherent conception justice?