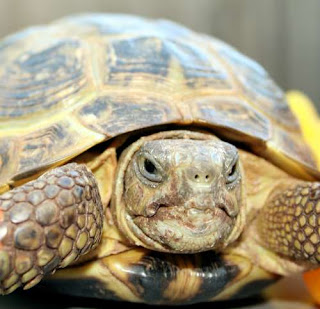 I was talking (well, moaning really) with a prison officer today about how there would be something to be said for being a tortoise. You would get to hibernate, going to sleep in the autumn and waking up in the spring.

This coming Sunday, our clocks change. Spring forward, fall back. So we get an extra hour in bed. Not quite hibernation but an hour's an hour.

I happened to be in the car at lunch time today, driving back from an appointment with a local faith leader to the prison. I was listening to Jeremy Vine, on Radio 2. Today one of the subjects being covered was the clocks changing and whether it's a good idea. There is a point of view out there that says we should abolish this twice a year move in and out of British Summer Time, and keep the time the same (BST) all the year round.

What interested me in the program was that it was explained that THE main original argument for putting the clocks back in October was so that children wouldn't be going to school in the dark. The reason this was said to be a problem was that, during an experimental abolition in the 1960s of the clocks changing, a terrible and tragic road traffic accident had occurred in Stornoway in the Western Isles, when a lorry driver had failed to see a group of schoolchildren at a bus stop, and careered into them killing them all. In researching for the Jeremy Vine program, it had apparently been impossible to ascertain that this horrific accident had ever happened. (I myself remember as a child being told that this was the reason for the clock change). Now it seems as if the whole basis for the current position is without foundation in fact. I hope that the story's not true. Obviously. What a horrible accident if it did happen. But how amazing and how interesting if it transpires that the reason we have had this clock change for all these years since it was reintroduced after the 1960s experiment was in fact a phantom reason.

William Willett, by the way, was apparently the man responsible for putting our clocks back and forward, which began in 1916, after his death actually. He was a businessman and proposed an early version of the idea in 1907 in a leaflet called "The Waste of Daylight" in which he pointed out that during summer mornings the light was wasted as most people were still sleeping, and that it would be better utilised in the afternoon by putting the clocks forward. But it seems it happened in the ancient world too. According to this site, Willett's actual idea was that "he could improve the population's health and happiness by putting forward the clocks by twenty minutes on each of four Sundays in April, and by reversing this idea by the same amount on four Sundays in September".
Posted by AnneDroid at 23:10

We don't change for two more weeks because the U.S. Congress in its infinite wisdom decided to lengthen the period we're on Daylight Saving Time (as it's called here.) I hate it in the fall when we turn the clocks back because dusk comes so much earlier. I know that we're going back to what's supposed to be the "real" time, but for a person with SAD, it's a horrible jolt.

P.S. I'm not surprised that there is a lot of SAD in Scotland. I'm convinced that it's related to life in regions close to the poles (and thus exposed to extremes.) I'm half Swedish, and I think I had a genetic tendency to it. Most of my brothers also seem affected.

Very interesting! I had no clue this concept was thought of so long ago. I don't see any benefits from it other than, like you said, that one time a year we get to sleep one more hour! I could use that more than once a year;)

Reading the last paragraph, I wondered whether Willett was a mathematician. Then I thought, 'No. He musta been an environmetalist.' But, no, he could only have been a politician with a brain like that! lol.

Maybe it would be good if the bulbs they put in the lights people with SAD get to treat their condition were put into lots of lights, including streetlights. It would be really expensive no doubt, though costs would fall with mass production, but it may save the country more in the end in terms of money spent treating SOME of the people with depression in the winter. Just a thought.

I dislike the daylight savings time changes. We tend to work daylight 'til dark and it doesn't matter what a clock says but the rest of the world has it's watch on and can't be ignored. (sigh)

I thought the whole reason for the daylight saving was to accommodate the farmers. To give them more light in the winter mornings to do what farmers have to do?

Linda - if you work daylight to dark I'm imagining you must quite like the winter.

Damo mackerel. Welcome. That certainly makes sense as a reason, and I'm sure it's the real one, but I remember the road accident story being told to me as a child.