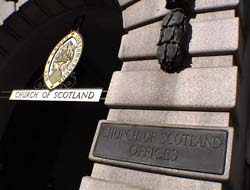 Today I went to a meeting about chaplaincies, not just prison chaplaincy but also healthcare, university and workplace chaplaincy. It was held in "121", as it's known, which is the Church of Scotland's central offices in 121 George Street, Edinburgh. It was an interesting meeting but it's not the meeting that I want to post about. When I was there, I was remembering a previous visit to 121 that you might be amused to hear about. At the time I was pretty stressed but in retrospect I see how funny it actually was.

About three years ago, I think, I applied for a job (which I didn't get, I wonder why) and was called for a second interview at "121". I got the train to Edinburgh, and emerged from the station into pouring rain. I put my umbrella up and it broke immediately. It was so thoroughly broken that I threw it in the bin. I was very short of money in those days (not that I've got buckets of it now either) and could not afford a taxi. So I set off to walk to my interview. I had an hour before my appointment so I had plenty of time to walk.

Of course I was totally soaked, especially because my jacket wasn't waterproof and had no hood (I had brought an umbrella after all). When I reached 121, I was (fortunately) half an hour early. I went into the Ladies room and removed my jacket and looked in the mirror. Not only was the bottom six to ten inches of the hem of my quite-long skirt soaked but I was horrified to see my red blouse had two big wet circles, the size of saucers(!), in a most unfortunate position. Female readers who have ever breastfed might be able to imagine the view.

As it was my second interview, I knew that I was going to go into a room to be interviewed by three or four male clergymen. So for the next twenty minutes I had to stand in a sort of limboing position half under the electric hand drier, attempting to dry my chest. Of course, every time anyone came into use the toilets, I had to stop and fake that I was just drying my hands.

I am completely rubbish at being interviewed at the best of times. But on that occasion I think I have an excuse for being particularly flustered. No wonder they gave the job to someone else.
Posted by AnneDroid at 23:23

ROFLMAO!!!! You cannot imagine the image going through my head right now...then again, maybe you can. ;-)

I'll throw on a Harry Belafonte record in your honor. How good are you at singing "Day-o!" ;-)

R U desperate for "hits"?

What a very funny story. I'm glad you can laugh about it.

Wet shirt??? Some people will do anything!! lol.