Here I am in the buff.

Recently a reader graciously emailed me suggesting that I should correct my misspelling of the word "waffle" in my blog header, as "woffle" (which I had before) has a somewhat naughty urban dictionary definition. I know I can trust you not to go and look it up. "Waffle", as well as being a foodstuff, has a somewhat similar meaning to "haver" or "blether". Thank you, my friend, for sparing me ridicule.

It's funny how words change their meanings over the years.

Hence I'm able to say that I'm writing this in the buff, while yet at the same time being quite warm in a fleecy and trousers.

According to The Phrase Finder, "in the buff" meaning naked, harks back to a previous meaning. In Shakespeare's day, "a buff-coat was a light leather tunic which was worn by English soldiers up until the 17th century. The original meaning of 'in the buff' was simply to be wearing such a coat. The later meaning of in the buff meaning naked is an allusion to the colour of the skin, which is somewhat like the colour buff (a light browny yellow). This was first recorded by Thomas Dekker, in his work Satiro-mastix or the untrussing of the humorous poet, 1602. In this he likens 'in buff' to 'in stag', which was a commonly used term for naked in the 17th century: "No, come my little Cub, doe not scorne mee because I goe in Stag, in Buffe, heer's veluet too.""

But according to the Urban dictionary (and I did know this, old and decrepit though I am) buff has a new set of meanings.

As if a wee four letter word, economically using only three different letters, hadn't already done enough, our family has become aware of another one in the last couple of years. 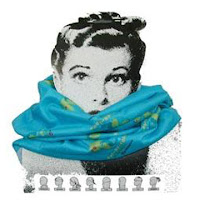 Last year on holiday the kids bought "garments" (I don't think that's the right term) called buffs. They have had great use of them especially to protect against midges. Adults wear them too and we bought my dad one for his birthday in July, and another friend too. I bought one myself at The Green Welly Stop on the way home from holiday. There's not much to them, really, just a tube of stretchy fabric, but of course the blurb tells you they're made of some special technofibre. This must explain why they cost more than you'd think.

There are various different ways to wear them (some too girly for boys and vice versa): 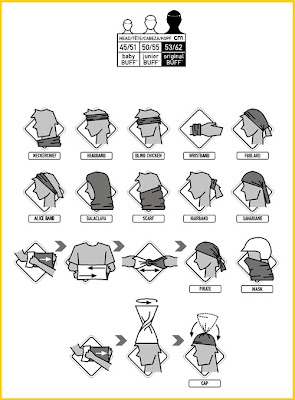 So when I say I'm in the buff, I am. Here's a photo Firstborn took of me an hour ago. This is not ideal as a way to wear it, unless you're hiding from the paparazzi: 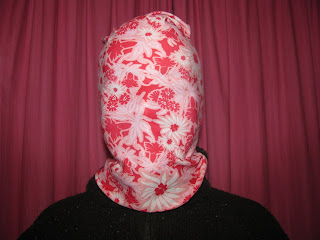 And don't you look lovely in the buff. (Not a sentence I say to women very often!)

Here we also use buff to mean shine, as in "After applying the polish, he buffed his shoes." Do you have that usage in the UK?

It is interesting how words change. When I was in grade school, you could still write the sentence "He was gay at the party" to denote happiness, and most people would read it that way. No more.

This is very apposite this morning! I have just written a comment about the jobs my Other Half has done in his time (ooh, doing time, there's another one!) and I so nearly wrote 'humping bales'. Just in time I remembered that our American friends might read that entirely wrongly. LOL!

I'm going to check out your links now - I have a feeling I'm going to be bookmarking the phrase finder!

The Phrase Finder. What a find. Thanks.

The term "buff" as we used it in emergency medical services, was somewhat derogatory in nature. It referred to those people that would show up at fires, ambulance calls, etc, or would monitor them with their portable scanners. They didn't do the job themselves, but were fascinated by those of us that did.

Useful for the midges at Tyndrum!

Thanks for imparting http://www.bluemanspill.com the topic. That is site really in time because I am living difficulties like it, here moreover I am exactly planning testing this for myself.