Speak up. I'm hard of understanding.

I was about a mile away from the jail this morning in my car when I saw some McDonalds litter lying in the road. As the prison is out in the countryside, it was an unusual and unattractive sight. 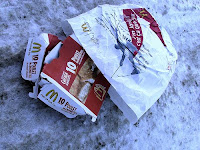 I didn't jump out the car and take a photo - this one's from Google Images.

I found myself feeling quite outraged and asking myself why someone would turf their rubbish out of the window of a car in such a beautiful area rather than keep it till they found a bin. I am not immune to various other forms of temptation but, particularly since I love the countryside, I just don't get it with littering - I don't get how people don't care.

As a prison chaplain, I'm constantly with people (staff too, not just prisoners). I'm trying constantly to empathise with people and understand them. Doing that with prisoners includes the huge challenge of trying to grasp what's got them to this point, including, amongst lots else, their "index offence".

As I reflect on the litter I saw this morning, and my reaction to it, I find it odd to realise that I have sometimes/often listened to a prisoner whose offence is appalling - much much worse than dropping litter in the grand scheme of things - and found myself thinking that I could understand just how it came to happen (while not condoning it). Other times I just know that I'm not connecting with the guy. And I have to ask myself whether that's because we are just very different types of people. (It's not always, because, of course, the whole thing is muddied by the fact that the prisoner may not be telling you the true story. I have realised that sometimes they are not ready even to tell themselves the true story never mind me, so I don't take it personally.)

The knack of chaplaincy (fortunately) isn't that we have to be able to relate 100% with everyone. Just as well. We can't. We need to be there for everyone, though, and to be clearly seen by them to be listening carefully and understanding as best we can.

Human beings are all wired up differently. When Him Indoors and I were student ministers we had to do the Myers Briggs personality test. As it happens we were newlyweds and it turned out to be hugely helpful to our marriage. It helped us such a lot in those early days to see in black and white that we are wired differently and react to things in different ways. According to Myers Briggs, I'm ENFP (apologies if that means nothing to you). My opposite number would be ISTJ. Him indoors is three quarters opposite to me. But here we are in 2008 still happily married after fifteen years, because we know that it's not JUST that men are from Mars and women are from Venus. On top of that our personalities are wired differently.

I don't think litter dropping or not litter dropping has anything to do with your Myers Briggs personality type. Nor has it anything to do with whether you're from Mars or whether you're from Venus. If I knew precisely what caused criminal behaviour I'd be a lot richer and more famous than I am. My point is just that I don't understand litter dropping,and also that no matter how hard I try as a chaplain, I'm never going to be truly able to understand everyone. I'll give it my best shot though, and in the process I get to hear some interesting stories, some of them even true.
Posted by AnneDroid at 21:49

In my first job in Scotland all my colleagues in the van would chuck litter out of the window wherever we went. Noticing that I didn't, I was mocked in a phoney 'posh' English accent and told 'we're not in ******* England now you know!".

I was horrified, intimidated and bewildered both by their bigotry towards non-Scots and their trashing of their own countryside. I also wondered if they had ever atually travelled South of the border?!

Thankfully such experiences have been very, very rare in my 17 years here.

Yes, there are some people we'll never relate to, but all we can do is try.

My husband is in INFP, so you and he are similar. I'm an INFJ.

While opposites may attract, (as you and Him Indoors obviously have) my own experience is that we tend to gravitate to people that are more like ourselves.

I found out only after a very long time as a paramedic that, trying to understand or to be empathetic to every patient I encountered was a bit like Sisyphus; that stone will always start running back downhill no matter what. At the end of the day I found that simply treating everyone with some degree of respect went a long way, at least most times. As I dealt with criminals as well, (at the scene of their misdeeds most often) they were the hardest by far to find any degree of respect for.

Like you however, I would occasionally find that it was the smaller offenses that would piss me off even more than some of the big ones.

I think that I just started becoming too jaded, which is probably when I first started realizing that it was time to get out of the business.

I don't understand it, if they don't do in their home why do it outside.. bins exist everywhere for rubbish and if everyone took it home the world would be a better place, not to mention safer.

Litter does that to me, too. I cannot understand the mentality that decides that 'someone else' should clean up after them. I imagine that a lot of people who drop litter would be appalled to visit a beauty spot and find litter all over the place, or find it strewn up their own driveways, and yet it seems fine to just toss it out of the window of their car.

Kudos to you for doing the job that you do, and for trying to understand everyone. It isn't possible, you know. You are only human, just like the rest of us. Don't beat yourself up.

I'm in Kentucky, and people think nothing of throwing their trash out the car window. This includes people in Lincoln Town Cars as well as old rattletraps (of course, that's what we drive . . .). They'll also load up the garbage from their house and go dump it over a hill onto someone else's property (often ours). Our river is completely disgusting and the roadways look like a paper factory exploded. I absolutely have no use for anyone who can't be bothered to find a trash can. As others said, there are bins everywhere.

When I first took the test I was INFP. Later on I turned into ENFP. My first husband was ETSJ. We didn't manage to make it work. I applaud you for doing so.

Thanks everyone. I have been reflecting that I don't have the same zero tolerance policy to litter inside my car or mess in the house (I don't like it but I certainly let laziness get the better of me so it happens plenty) so I guess I'm a bit of a hypocrite.

I love the countryside but I think that really I neither love my house nor my car - they are just functional to me, although I'm hugely grateful for both. If I could love them a bit more I could perhaps be more motivated to keep them looking their best.