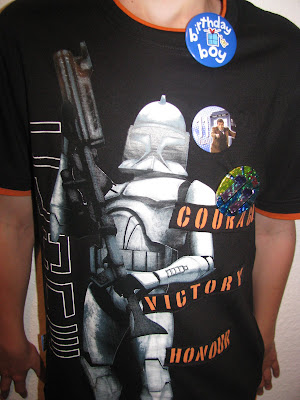 Blue-eyed boy is eleven now. Just like that. We moved here when I was expecting him so his age also marks the length of time Him Indoors has been minister of our church. Time flies when you're having fun. We had two other eleven year old boys with us for a sleepover last night, preceded by a trip to the cinema to see the Star Wars Clones movie.

A major theme of this week has been goldfish. The lady in the petshop must think I'm stalking her. Last weekend, Penultimate Child got two goldfish, called Daisy and Pebble (and a Scooby Doo fish tank) for her birthday. Youngest Child then remembered, and reminded us, that she had not spent her holiday spending money this summer and she suddenly wanted a fish tank too. So, through the week two more goldfish arrived, Ella and Bella, in a mermaid fish tank. The two fish tanks are side by side in their bedroom. Blue-eyed boy invited his two pals to choose a goldfish each on his behalf this morning and now we also have Fish and Chips in their Spongebob Squarepants fish tank, in his bedroom. Did I mention we already had a fish tank - in the kitchen - with one goldfish in it. He (if it is a he) is either called Murdo or Hamish. We don't know as we used to have two and one died but we don't know which one, so we don't know which we still have. Seven fish. Four tanks. Ridiculous. Totally and completely ridiculous. I did feebly suggest that we got one big tank and they could all keep each other company but this was dismissed immediately. (Running four filters will not be at all good for the Droid family's carbon footprint. However I'm pinning my hopes of justifying it all on the thought that perhaps growing up having to care for pets will make the children responsible and caring human beings...)
Posted by AnneDroid at 22:15

Oh my. Would it comfort you to mention that most goldfish are short lived?

They're not really short lived - unless something is wrong with their living conditions or you're unlucky. Ours are well over ten years old now!

I'd agree, though. It's good for children to have pets that they're responsible for, so a tank each is good from that point of view. And goldfish are fairly undemanding. Keep the water clean and aerated and the right temperature, enough space and a few plants and not too much food and they're happy.

Fish have got to be easier than Chickens..... sigh.

I'm afraid a decision will have to be made in order to save Murdo/Hamish's sanity. We had 2 identical chickens called Maisie and Daisy and one of them got eaten by a fox. We have decreed that it was Daisy who survived. I'm not pretending it was an easy decision - it felt rather as if I had killed poor Maisie myself!

(Only 4 posts in, and half of them are about chickens.)

I identify! We had a fish tank on our kitchen bench for ages but getting the water just right for coldwater fish isn't easy in Aussie summer temps. I think I spent more on fishy medicine than fishy food and guess who was the tank cleaner! Then came the mice, the ponies, the dogs . . .you've started a never ending cycle now!