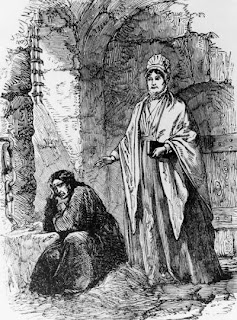 This picture is Elizabeth Fry visiting a woman prisoner.

Now here's an interesting quote: "The system is gendered - far too few women are held accountable and the proportion of female to male prisoners is too low. From general social attitudes, to police, to COPFS, to judges, women are infantalised and pathologised but not held criminally accountable. Think of the children who really should be protected!" So says the first comment here.

This really has made me think. I have always bought into the widespread belief that too many of the women sent to jail are poor souls who shouldn't be there, victims themselves really, and so on. This is the first time I've thought about the possibility that perhaps as this commenter says, "women are infantalised and pathologised but not held criminally accountable". Mmmmm. I'm going to think more about this. I have visited a women's prison in the past but today I was visiting a men's jail which has about 1,500 prisoners in it (more than it is designed for). The chaplain there led me through the area where the families who were in for the visiting time were congregating. He was saying that quite often the women cause fights and arguments and are difficult for the staff to deal with. I've often heard officers say that working at the female prison is harder in many ways than working with male prisoners.
I guess ladettes who want, for example, to drink like lads at weekends and get into brawls in the street need to be treated fairly. And fairly works two ways...

But aren't chaplains supposed to be nice? Not seeking to get more folk locked up! Well chaplains are supposed to speak up for what seems to them morally right as best they can. Our governors usually tell us they want us to be knocking on their door if we see unjust or unethical practices in their jails. If I do, on reflection, conclude that what this commenter said is true, then maybe I'll end up with the view that more rather than fewer women should be locked up, but that'll be ethical and moral if it's because I'm standing against infantalising and pathologising women.
Posted by AnneDroid at 22:19

Very thought provoking.
Throw the book at em!
No wait...
Set them free!
No wait...
Hold them accountable, yet tell them you believe they can be something better?
Well, its a start for me at least.

Very encouraging to me today. Thanks.

I'm always impressed when I see others questioning their assumptions. Issues like this have no easy answers, but bringing them out into the open can only be for the good. Thanks for a thought-provoking post.