It's a Good Book. 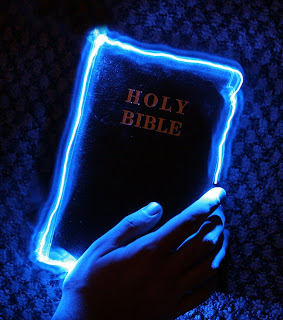 Today two representatives of The Gideons International came along to one of the jails I work in to give out free New Testaments to any prisoners who wanted one. It was interesting to be a fly on the wall as the offer was made. Some prisoners said "no" straight out. Some said "yes". Some took one thinking it was a free diary and hurriedly gave it back when they discovered it wasn't. Some took one automatically because prisoners (like most of us) like free stuff and then, on seeing what it was, acted as though they'd been handed a red hot coal and couldn't get it out of their hands quickly enough. Some who said "no" will probably sidle up to me in the next week or two and ask for one and admit they didn't want their pals to see them take one. Some of those who took one may use the pages as skins for their roll-up cigarettes (apparently this happens though they've had the grace not to do it before my eyes thus far). Hopefully some may have a wee look at their copy.

Chuck Colson, erstwhile prisoner following Watergate but subsequently a committed Christian said this: "The Bible - banned, burned, beloved. More widely read, more frequently attacked than any other book in history. Generations of intellectuals have attempted to discredit it; dictators of every age have outlawed it and executed those who read it. Yet soldiers carry it into battle believing it more powerful than their weapons. Fragments of it smuggled into solitary prison cells have transformed ruthless killers into gentle saints. Pieced together scraps of Scripture have converted whole villages of pagan Indians".

I am not fond of "Bible bashers" (God wants spiritual fruit, not religious nuts). I have made a particular point of never being a "Bible basher". But in my enthusiasm for avoiding being seen as such I probably go too far the other way and, far from wearing my heart on my sleeve, have it hidden away in an underground bunker. So just for today I would like to put on record that I ACTUALLY really really like The Bible.
Posted by AnneDroid at 22:10

I really like the Bible as well. It tells me how much God loves me and what He has done for me.

Thanks or your work in the prison system, Not easy work (I wouldn't think so, anyway)

I just got out of jail. My heart goes out to everyone that is in or near a jail. I pray for them(you), that God will do His work through them...somehow.

The bible is the cradle. Jesus is one that the cradle holds. The bible is great because it points us to and tells us about the love of Christ for us and the forgiveness of sins that He so dearly bought (with His life) for us.

The second word in my last comment should have been 'for'.

Thanks Steve. And thanks for dropping by.