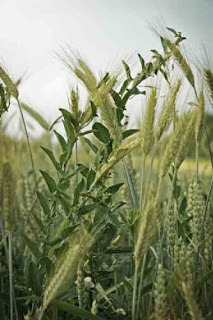 As well as thinking about the lost sheep, or more particularly the partying on high, at the jail service this afternoon we also looked at the small print, in a way. It's another of the surprising and interesting things Jesus said, and I was particularly interested in the reaction.

In Matthew 13 we're told a story (I love stories): "A man sowed good seed in his field. One night, when everyone was asleep, an enemy came and sowed weeds among the wheat and went away. When the plants grew and the ears of corn began to form, then the weeds showed up. The man's servants came to him and said, "Sir, it was good seed you sowed in your field; where did the weeds come from?" "It was some enemy who did this," he answered. "Do you want us to go and pull up the weeds?" they asked him. "No," he answered, "because as you gather the weeds you might pull up some of the wheat along with them. Let the wheat and the weeds both grow together until harvest. Then I will tell the harvest workers to pull up the weeds first, tie them in bundles and burn them, and then to gather in the wheat and put it in my barn".

The wheat and the weeds story's about church, mainly. If you go to a church, any church, the people in it, while possibly being either cat people or dog people, are definitely either wheat people or weed people (not weedy people, that's a different thing). We can't always decide whether people are wheat people or weed people, and most of the time it's unhealthy for us to be trying to - that's judgementalism. But it's as well to remember that's the scenario. I explained that to the guys. I paused half way to check how much they grasped it. Some of them said they had no idea what it meant at all. Others said it was obvious and self-explanatory. Point proved I guess! Incidentally Jesus explained it better than me.
Posted by AnneDroid at 22:46

Email ThisBlogThis!Share to TwitterShare to FacebookShare to Pinterest
Labels: church, the Bible

When this parable is told to middle-eastern shepherds, they react differently to us.

We are surprised that the shepherd leaves the 99. They on the other hand fully expect that. A stray sheep is always captured they tell us. This however is always to kill it, not restore it because (i) it will probably be eaten by a predator anyway - and so it might as well be shared by the owners and (ii) if it doesn't get eaten it might wander back into the flock, which would be disastrous. Dodgy sheep, are always wandering off, and next time it goes astray it could lead loads of the other sheep with it... only a fool would not track down, and kill a lost sheep!

This parable really is amazing!

I explained that to the guys. I paused half way to check how much they grasped it. Some of them said link they had no idea what it meant at all.