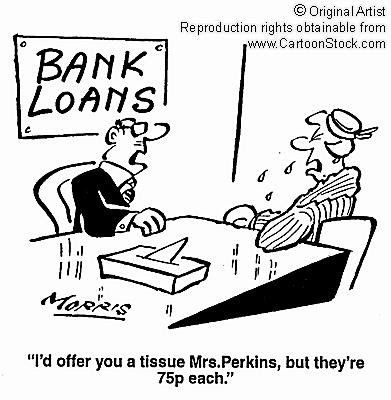 One of the tools of the trade of a prison chaplain is a box of tissues. When the said prison chaplain also has a cold she's had so long she's forgotten when it started, the need is all the greater, to have a box handy.

On my way to work this morning I called in at the village shop near the jail where I spotted five boxes of a well known brand of man-size tissues (wouldn't they be huge if they really were man-sized? And which size of man would they be the size of?)
The boxes were identical, and had the price already printed on them by the manufacturer. Four of them said "99p". The other, exactly the same in other respects, said "Special Price. £1.69". Isn't "special price" supposed to imply a discount not a Whatever-It-Is-Per-Cent increase (please someone work that out for me as I'm not fond of arithmetic) of 70p"?

And talking of man-size, it was my privilege to facilitate the provision of a pair of overalls to a very tall prisoner today (not really part of my job description of course) who was unable to fit into any of the overalls provided by his Work Party. A local minister found me a pair in his garage. You know who you are, M. Thank you. He's terribly pleased.
Posted by AnneDroid at 18:32

Email ThisBlogThis!Share to TwitterShare to FacebookShare to Pinterest
Labels: Chaplaincy