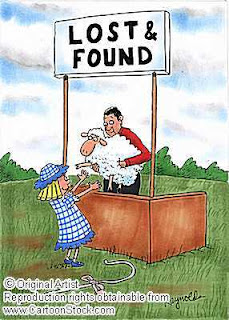 Little Bo Peep has lost her sheep and doesn't know where to find them. Unlike this cartoon what the rhyme says is "Leave them alone and they'll come home bringing their tails behind them" (I nearly put "tales" there instead of "tails" - how much more interesting that would be!)

The phrase "lost sheep" has entered our language. I like to think this comes not from Little Bo Peep but from the illustration Jesus used: "Suppose one of you has 100 sheep and loses one of them - what does he do? He leaves the other 99 in the pasture and goes looking for the one that got lost until he finds it."... and then he goes on to say that once found, there would be a real celebration. But the most surprising bit is the punchline. (Jesus said some very surprising things). "In the same way, I tell you, there will be more joy in heaven over one sinner who repents than over 99 respectable people who do not need to repent).

In other words if, just for example, a chav (or ned as they're known in Scotland) as depicted in the Chavopoly board of a recent post below (13 April 08), were to repent (genuinely) there would be a party in heaven such as would not happen for the good guy who's always been a good guy.

Just astonishing. No wonder those on the outside find what we Christians believe totally offensive.

Incidentally, we looked at this at the service in the jail this afternoon, with the aid of a box of Celebrations to reinforce the point. I gave the (very) few leftovers to a couple of officers afterwards. I did not mention Little Bo Peep this afternoon btw - not really the thing to do in a macho environment.
Posted by AnneDroid at 22:12