Prisoners - the right to vote? 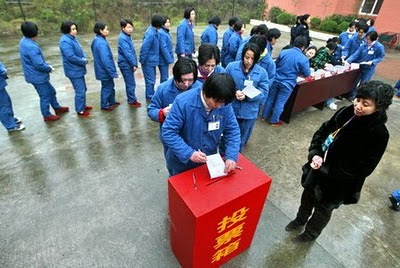 This newspaper article, like many others in the press this week deals with the recent news that the British government are going to have to face up to the European Court of Human Rights' decision that UK prisoners should be allowed to vote.

I am really delighted that UK prisoners are to be given the vote. In reality, I think, not all that many prisoners will want to exercise that right, and, even if they did, they aren't such a huge percentage of the population that the outcome of any election would be really affected.

(1) Britain has traditionally smugly seen itself as being one of the "good guys" in terms of human rights but must walk the walk as well as talking the talk. If China (see the photo above) can be giving prisoners the right to vote, who are we to cast aspersions on their human rights record whilst being so proud of our own?

(2) What we in society want our prisoners to gain whilst in custody is a sense of responsibility. Yet what prison actually does is remove all responsibility from offenders, taking away almost all their power to decide anything, institutionalising them, and in fact infantilising them. Allowing and encouraging prisoners to vote would help a little to mitigate against this negative process, allowing them some autonomy and enabling them to feel like stakeholders in the society we want them to contribute to rather than damaging.

What has made me sad this week, though, is the tone of much of the "red top" tabloid coverage of this in the media, and also the government itself's presentation of the thing. It is being presented as a Bad Thing that we are having to give in, at last, very reluctantly, to this pressure when really we would much rather not. I find that sad and disturbing. (Mind you, and I'll leave my rant on this for another day) much of the media coverage on offenders upsets me, so I shouldn't be surprised.
Posted by AnneDroid at 22:53

Hi Anne, Like your post. However I dont think you can really compare rhe Chinese Prison System with the Scottish / English Prison System. After all the picture you have the inmates are all there in their uniforms (very fetching I must say)surely wouldnt be posed in a totalatarian state. Alot of those (chinese prisoners)are doing their "bird" for so called political crimes, and of course alot of offenders are not given the oportunity to vote as they have been executed and their organs used for transplants.
However I am in favour of our prisoners getting the chance to vote now. As you rightly said its all about taking responsability. Unfortunately what is seen as a great triumph for prisoners rights will go over the heads of alot of the prisoners it affects. I can back that up by asking the question "Why has it taken so long for this law to go to ECHR in the first place ?" (not including the appeals time). In my opinion apathy on behalf of the prisoner population in general.

I can't really believe that you rejoice in having the likes of Harry Roberts and the vile Hirst character deciding who rules our country!
Still, I suppose we deserve what we get!

If we want prisoners to re-integrate into society on release, we need to give them responsibility in prison. The vote is part of that. Too often we, as a society, tend to forget prisoners are people too. No matter what they've done. When we stop treating them as people, is it really any wonder they re-offend?

Thats for a thoughtful post. As for the red-tops - I wouldn't even stick them on a bit of string in the loo! Unfortunately, it is where many people get their "news".