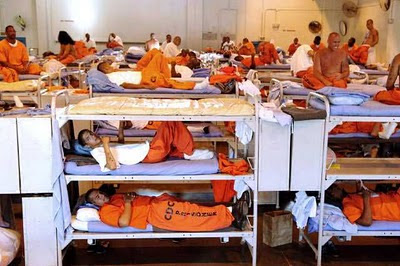 Yesterday I was blogging about the Scottish Prisoners Week theme of "More Than A Number".

It's not just the actual prisoner number that contributes to the "just-a-number-ness" of prison. There is obviously much more than that involved. When a prisoner begins his sentence, his first hours in the jail will see him "dehumanised" by the handing over of his own clothes and the donning of prison issue clothes.

In many prisons in Scotland the colour of your shirt will show which hall you have been assigned to (leading amongst other things to sex offenders being obvious to other prisoners, amongst whom they are very unpopular).

The dehumanising process of coming into prison - the "dog boxes" in the prison transport vans and the "dog boxes" in the prison reception, the allocation of a number and the change into prison uniform - known as "mortification" - is not accidental. It is deliberate and is to give offenders very firmly the message, "Right, then, sonny. You might have been a big hot-shot on the outside, top of your criminal tree. But in here you're just a number. You're the same as the rest of them. The sooner you buckle down and accept this new reality the better you will get on".

There is a certain apparent and appealing logic to this thinking, but in my humble opinion it's deeply flawed.

For every offender who needs to get this message, who's got too big for his criminal boots, I think there must be twenty others who already think they're nothing. (I've plucked the number twenty from the air - it might be a lot more). The point is that, however many offenders come in cocky and arrogant and needing humbled, many times more than that come into prison with a pick and mix of: mental health issues, addiction issues, past childhood abuse/neglect/trauma, illiteracy, social inadequacy, learning difficulties, bereavement issues and/or guilt. Far from needing mortification and dehumanisation, what they need is healing, restoration, hope, encouragement, education, healthcare, addictions support, and (to be radical) love .

Even those offenders who do need taken down a peg are unlikely to be transformed for the better by the mortification process. It will make the hard man harder - he will be angrier with the authorities by the end of it than he was at the start, and determine that he will not let the system break him (as he sees it).

More Than A Number is a great theme for Prisoners Week. It would make a great motto for all our social interaction actually.

I posted the following a few weeks ago but feel that it fits this post too and it's so well worth repeating I'm half-thinking of printing it off and framing it!

We want them to take control of their lives, own problems and quit being a parasite...
So we make them totally dependant on us.
Posted by AnneDroid at 22:16

Oh what a relief to have found a woman after my own heart (or should I say a sister after God's heart!). I support a young man who has been in and out of prison since he was 17. He was abused as a child, spent time in residential care, has addiction issues, mental health issues, but he is the most intelligent person I've ever met, and one of the kindest. How I love the words by Judge Dennis. Thank you.

Hello my sister! And welcome. x