More Than A Number. 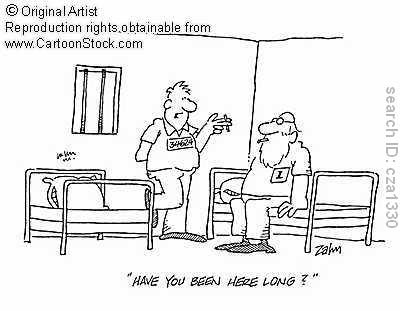 This week is Prisoners' Week (see yesterday's post). In Scotland we have as our theme this year "More Than A Number". I think it's one of the best themes in years. It's surely obvious that people are more than a number, and yet I do think we need to remind ourselves frequently lest we miss the obvious.

We all have numbers these days. I must be known to "The Authorities" by many different numbers, including my passport number, my national insurance number, my driving licence number (and the number of points on it, ahem), my bank account number, my patient number, my Tesco number, my PIN numbers, my blood donor number, my work ID number, and so on and so on. I don't mind this really as it's an efficient way to run administrative systems.

However, in Prisonworld, the numbering system makes me a little uneasy. It's not that I think it's wrong or should be abolished. I can see it's administratively essential. But the unfortunate side-effect seems to me to be dehumanising psychologically.

The number you are given as a prisoner stays with you for the rest of your life - if you get another prison sentence you will be given the same number. This means that, as the cartoon suggests, the smaller the number a prisoner has the longer ago he first entered the system, although he may have been out of prison for years and years in between sentences.

Recently a prisoner returned to our establishment who was with us a year or more ago. When I looked at the list of "transfers in" and saw his surname, which is quite a common one, I realised that I knew it was him by his number. I don't particularly have a head for numbers (I've been known to forget my PIN number at the bank) so I was surprised to recognise a prisoner in this way.

Some prisoners don't seem to mind their number at all. I think it's sad that they've become so institutionalised that it is their "normal". Some even get their prisoner number tattooed on their body - occasionally with a barcode design!

Me? I don't want to lose my discomfort with the prisoner number. I'm not opposed to it. As I said, we've all got lots of numbers these days in lots of administrative systems. But in Prisonworld it is such a symbol of the one-size-fits-all dehumanising system that I will be quite content if I go through the rest of my time as a prison chaplain feeling slightly awkward every single time I have to ask, every day, "What's your number?"
Posted by AnneDroid at 11:08